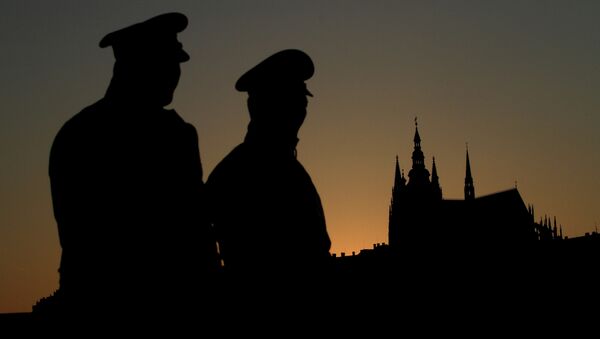 Czech News Agency (CTK) reported on Wednesday, citing a report drafted by the Defense Ministry, that in the event of an emergency situation and a great influx of migrants, up to 2,600 military troops could be mobilized to tackle the situation.

"The Greens do not see the migration situation in the Czech Republic as a crisis. We compared the current numbers of asylum seekers to the numbers that we faced 15 years ago – they are about one tenth of that number," Tomas Jungwirth told Sputnik.

"In that sense, I think that reinforcement of the border controls by sending more police troops appears to be rather excessive and unnecessary, even though the number of policemen intended for deployment is not very high," Jungwirth said.

Earlier in August, Czech President Milos Zeman said up to 1,500 soldiers could be sent to patrol the Czech borders.

Due to the inflow of migrants, the Czech Republic set the security threat at the first level. Should it rise to the third level, military forces will be deployed to protect the national border.

European Commission to Offer Greece Support to Deal With Migrant Crisis
Europe is now facing a major migrant crisis, with thousands of undocumented asylum seekers from conflict-torn countries in North Africa, the Middle East, Central and South Asia arriving to the European Union in search of a better life.

In May, the European Commission called on EU member states to let in some of the 40,000 refugees from Africa and the Middle East currently in Italy and Greece. Brussels proposed a quota system to evenly redistribute migrants throughout the bloc based on social and economic indicators for each EU member state. The Czech Republic, along with some other European nations, rejected the proposal of a mandatory quota system, agreeing on a voluntary system to accept migrants.

"Apparently, the quota proposal seems a rather reasonable one at least in the short term. But one should not expect a definite solution or an end to the crisis due to the quotas, especially given the political sensitivity of the issue," Tomas Jungwirth said.

Jungwirth explained that the Green Party would prefer the voluntary participation of the country in the redistribution of the refugees. However, Jungwirth noted, it is unlikely to happen any time soon.

"We of course accept that there is a common European moral responsibility to deal with the situation and to help people in need," Jungwirth said.

According to UN data, 137,000 refugees crossed the Mediterranean Sea for Europe in the first six months of 2015, with thousands dying at sea in the process.