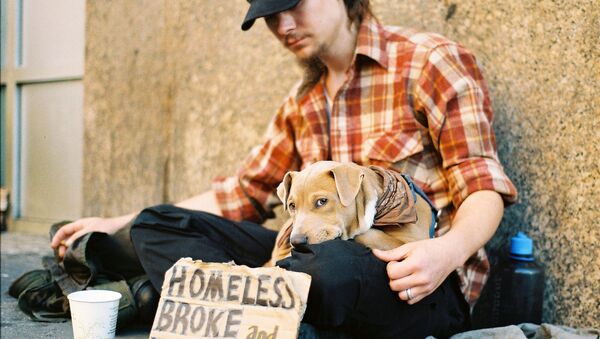 © Flickr / Adrian Miles
Subscribe
The New York Police Department has taken measures to arouse ire at the increasing number of homeless people in the city by pushing the idea of taking photos of them urinating and publicly violating the city's quality-of-life laws; their actions serve to reflect poorly on Mayor Bill de Blasio.

A spike in the homeless population of the Big Apple is undermining the city's status as a popular vacation destination for tourists. In response, the Sergeants Benevolent Association (SBA) urged its members’ families and friends on Monday to take pictures that would reveal the city’s deterioration.

As police officers don’t have the right to take pictures of anybody in the street while on duty, SBA President Ed Mullins urged SBA members to take pictures ”while traveling to and from work or any time off duty.”

“We will refer issues to the proper agencies, and we will help create accountability across the board,” said Mullins, one of De Blasio's chief critics.
The SBA’s profile on Flickr has already posted its first shots of vagrants urinating, sleeping in the streets, and begging for handouts.

Important new President's Message on the SBA website. We are the Good Guys! Please visit http://t.co/Zf2Fty6sqg.

Many consider Mullins’ initiative to be an appropriate response to two years of failed policies, an increased number of vagrants flooding NYC streets and a 10% rise in homicides, as the city has tried to preserve its hard-won status of the safest large US city. He slammed the City Council Law and the Right to Know Act, a legislative act aimed at protecting the civil and human rights of New York residents.

The SBA Head is surprised by how much the difficulty of police officers’ work , which often entails arresting a suspect or taking care of the victims of crimes, is underestimated.

“Amazingly, no one seems to give any thought about an officer fighting for their life or pulling a deranged and dangerous person off an innocent crime victim,” Mullins wrote.

Ed Mullins' NY Post Letter to the Editor in response to the Garner Case Settlement can be found on the SBA website: http://t.co/Zf2Fty6sqg.

Taking a dig at De Blasio, Mullins stated that "attempts to pass self-promoting agendas are not the answer to building relationships with communities who don’t trust the police. It only serves to lie to people who are trying to live life and share in a piece of the American Dream.”

Mullin has high hopes for the initiative, as it has already boosted people to post nearly 250 photos of homeless NYC residents.

NYC's "renaissance" in the 1990's saw crime rates plummet and a wave of new residents who had once considered the city too intimidating for family life.

According to Business Insider, the city had hit bottom in the 1970's and 1980's as middle class white residents fled for the suburbs to escape crime, widespread drug use and urban decay. The city even declared bankruptcy in 1975. By 1990, homicides peaked at 2,245, nearly seven times the 328 recorded in 2014.

NY Police Photographing Homeless 'Waste of Resources' - Advocacy Group
Afterwards, under Mayor Rudolph Giuliani, a former federal prosecutor, crime fell drastically and once-blighted neighborhoods saw an influx of young professionals. However, his tough policies, which were reflected by his successor, fellow Republican Michael Bloomberg, were not popular with everyone and in late 2013 Bill De Blasio was elected.

Mayor De Blasio professes to maintain softer policies toward suspected criminals, which has earned him the ire of the city's law enforcement professionals, who are lionized by some for their role in 9/11 and demonized by others for having targeted black American suspects such as Eric Garner, who died at the hands of an NYC cop in July, 2014.