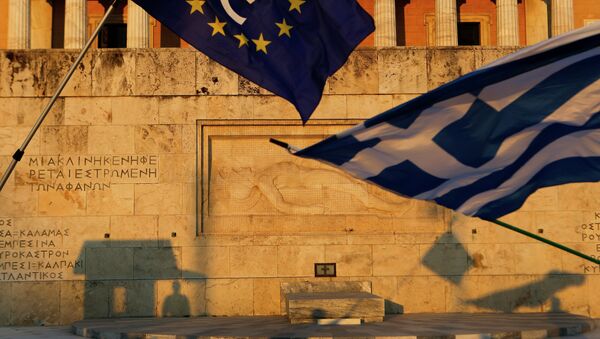 European Commission's coordinating spokeswoman for economic and financial affairs said that last details of a new bailout deal for Greece have been agreed upon by the country and its creditors.

Saving Greece: Deal Between Troika and Tsipras Reached 'in Principle'
BRUSSELS (Sputnik) – The last details of a new bailout deal for Greece have been agreed upon by the country and its creditors, the European Commission's coordinating spokeswoman for economic and financial affairs Annika Breidthardt said Wednesday.

"We concluded yesterday the technical agreement between the institutions and the Greek authorities, based on the Eurosummit of July 12 and 13, and the work that was done by the institutions with the Greek authorities in the months before. I mentioned yesterday that some details were still left to be clarified. All last details have been clarified," Breidthardt told reporters.

Breidthardt added that the finalized text of the memorandum of understanding was sent to EU member states last night.

Later in the day, the Greek government is expected to present a significant number of legislation to the parliament.

The new bailout package of up to $95 billion will be administered to the country by its international creditors over the next three years in exchange for strict economic reforms, including pension cuts and tax hikes. A preliminary agreement was reached in mid-July.