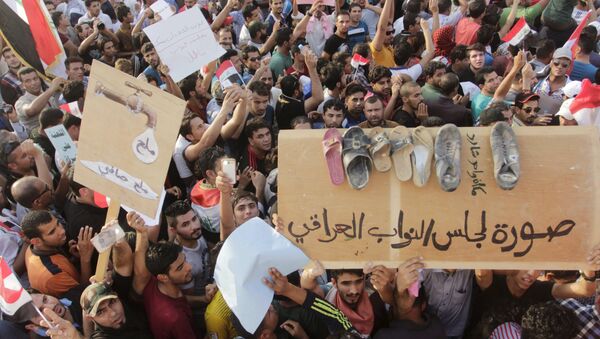 © REUTERS / Essam Al-Sudani
Subscribe
Tens of thousands Iraqis gathered on the main squares of the state’s key cities for the second Friday in a row to march against low quality services, ubiquitous corruption and electrical power problems across the country.

Multitudes of citizens walked onto Tahrir square in Baghdad demanding the dissolution of parliament and a solution to the electricity supply crisis that struck numerous Iraqi regions when temperatures broke above 50 degrees Celsius.

Members of various political and religious groups came to the rally holding Iraqi flags, as well as representatives of professional syndicates. According to organizers’ data, three quarters of demonstrators were liberals, communists or independent. Protesters called for government to comply with human rights and to deal with corruption.

"All of you together to the court, all of you are thieves," the crowd declared.

"The problems in this country have become too many to list. And our leaders talk a great deal but then they do nothing to fix them," one of the protesters said.

SMS Loans, Tax Fraud Buy 'Terror-Trips' to Syria, Iraq – Swedish Media
Many Iraq residents believe that the country’s chronic problems have not been resolved because of the long-lasting war with ISIL militants, and authorities lack power to take crucial steps to improve the situation in the country, according to Guardian.

Earlier this day, the country’s leading Shiite clergyman Grand Ayatollah Ali al-Sistani released a statement through his aide addressed to Prime Minister Haider al-Abadi, stressing that he should immediately start reforming the government and strike those who steal people’s money with an "iron fist."

Haider al-Abadi responded with a statement, noting he would do everything he’s capable of to trigger reforms in Iraq. He promised to require power cuts for government institutions and official figures, media reports.

"I declare my total commitment to the directions of the religious Marjaiya [Shiite religious leadership], which has voiced the concerns and aspirations of the Iraqi people," the Guardian reported, quoting al-Abadi’s statement.

Haider al-Abadi came into office a year ago, promising to deal with the flaws of previous Prime Minister Nouri al-Maliki, who was accused of spreading corruption and allowing the military to collapse in the country.