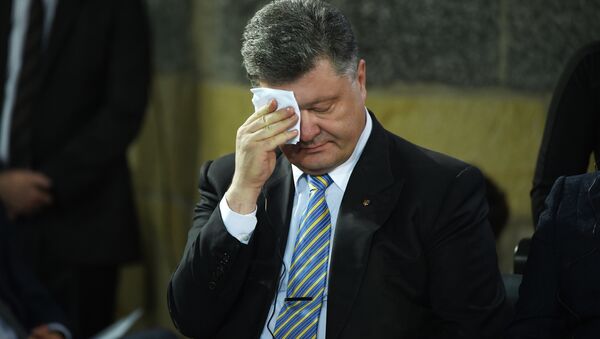 The European leaders’ passionate though short-lived love affair with the Ukrainian leaders appears to be running out of steam with several major European newspapers harshly criticizing the policies of President Petro Poroshenko.

“Petro Poroshenko promised to sideline the oligarchs and give up his own business companies. In fact, his confectionery business is prospering and his business ties remain questionable, the German newsmagazine Der Spiegel wrote.

You Know, He May Be Right: Yarosh Demands Poroshenko's Resignation
“The Roshen Company still belongs to the president and keeps expanding fast with 14 new outlets now in business in downtown Kiev alone, the German Der Spiegel wrote.

Despite the crisis, Poroshenko’s International Investment Bank is doing equally well seeing its capital going up by a hefty 84.5 percent in 2014,” the magazine added.

“Poroshenko’s business interests also include the energy sector with his longtime business partner landing a lucrative state contract and the Energy Minister, another good friend of Poroshenko’s, preventing the IMF-proposed privatization of a major network of electric power stations,” Der Spiegel wrote.

In London, The Financial Times was equally critical of the Ukrainian leader and fearing that Poroshenko could be toppled by his own army.

Meeting with Ukrainian soldiers in Donbass the FT correspondents said many were losing faith in the president and complained about the lack of arms and even basic necessities. They want him to visit the frontlines, instead of showing up at military ranges back in the rear.

“The situation in Donbass is unstable. Poroshenko is unable to end the conflict. The number of his critics is growing every day and this may eventually lead to a mutiny elsewhere in the country,” the newspaper warned.

Whether Kiev is going to blacklist Der Spiegel and The Financial Times, just like it did many Russian media outlets, is hard to say.

One thing is clear: Poroshenko’s western partners are feeling increasingly disappointed with his presidency.