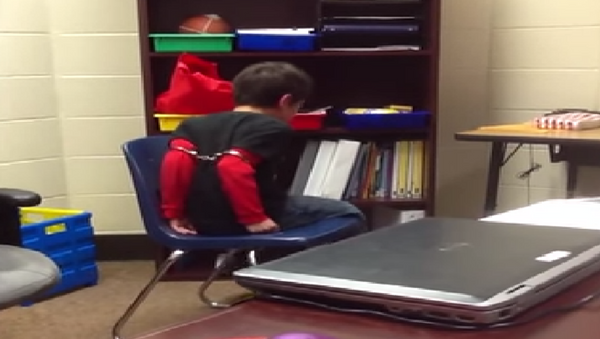 © YouTube/ACLUVideos
Subscribe
Two elementary school students from Kentucky were traumatized after a deputy sheriff handcuffed the kids for behavior associated with their learning disabilities, a lawsuit filed on Monday claims.

The two children, an 8-year-old boy and a 9-year-old girl, were so little that Sumner had to lock the handcuffs around their biceps behind their backs, causing the children to cry and scream out in pain.

Newly released footage shows the boy, a 52-pound Latino child identified only as SR, being shackled.  SR has a history of trauma and struggles with attention deficit hyperactivity disorder.

The female child, an African-American minor identified as LG had been handcuffed by the school resource officer before. She also has ADHD as well as other special needs.

"Shackling children is not okay. It is traumatizing, and in this case it is also illegal," Susan Mizner, disability counsel for the ACLU, told WKYT. "Using law enforcement to discipline students with disabilities only serves to traumatize children. It makes behavioral issues worse and interferes with the school’s role in developing appropriate educational and behavioral plans for them."

Neither of the children were arrested or charged with any criminal acts.

According to WKYT students with disabilities make up 12% of student populations, but make up 75% of those physically restrained by adults during school hours.  They also state that children of color are disproportionately affected by this type of discipline.

"Kentucky’s school personnel are prohibited from using restraints, especially mechanical restraints, to punish children or as a way to force behavior compliance," Kim Tandy, executive director of the Children's Law Center, told WKYT. "These regulations include school resource officers. These are not situations where law enforcement action was necessary."

In addition to damages, the lawsuit also seeks to require additional training for school resource officers.

"It is heartbreaking to watch my little boy suffer because of this experience," SR's mother, identified as TR, told the local paper. "It's hard for him to sleep, he has anxiety, and he is scared of seeing the officer in the school. School should be a safe place for children. It should be a place they look forward to going to. Instead, this has turned into a continuing nightmare for my son."

The law firm working on the case has stated that the resource officer’s involvement with disciplining the children was harmful and unnecessary and served to escalate the situation instead of helping.

000000
Popular comments
This is heartbreaking If you can't manage children without doing this you are in the wrong job.
Jlproject
4 August 2015, 04:34 GMT
000000
Problem is, now days its illegal for a teacher, principle, etc to physically restrain ...or even touch, out of control children.... and calling police to do so is their only option. Shackling seems horrible, but you cant swat a kid either to make him obay when he will not do anything you ask or plead with him to do. You really can't have a kid running amouk though the school, disturbing EVERYONE. Hence best choice is schools, usually privately run, that have special programs and structures just for these kids with behavioral disabilities. But the system tends to balk and not want to place the kids where they need to be, citing mainstreaming, (and not wanting to spend the money that special schooling costs), and maybe you will get a personal aid to help keep them on track. And yes, we, and our school special ed aide managed to successfully raise our own HDAD afflicted son into a successful adult.
White_Eagle1
19 August 2015, 03:48 GMT
000000
Newsfeed
0
New firstOld first
loader
LIVE
Заголовок открываемого материала
Access to the chat has been blocked for violating the rules . You will be able to participate again through:∞. If you do not agree with the blocking, please use the feedback form
The discussion is closed. You can participate in the discussion within 24 hours after the publication of the article.
To participate in the discussion
log in or register
loader
Chats
Заголовок открываемого материала
Worldwide
InternationalEnglishEnglishMundoEspañolSpanish
Europe
DeutschlandDeutschGermanFranceFrançaisFrenchΕλλάδαΕλληνικάGreekItaliaItalianoItalianČeská republikaČeštinaCzechPolskaPolskiPolishСрбиjаСрпскиSerbianLatvijaLatviešuLatvianLietuvaLietuviųLithuanianMoldovaMoldoveneascăMoldavianБеларусьБеларускiBelarusian
Transcaucasia
ԱրմենիաՀայերենArmenianАҧсныАҧсышәалаAbkhazХуссар ИрыстонИронауОssetianსაქართველოქართულიGeorgianAzərbaycanАzərbaycancaAzerbaijani
Middle East
Sputnik عربيArabicArabicTürkiyeTürkçeTurkishSputnik ایرانPersianPersianSputnik افغانستانDariDari
Central Asia
ҚазақстанҚазақ тіліKazakhКыргызстанКыргызчаKyrgyzOʻzbekistonЎзбекчаUzbekТоҷикистонТоҷикӣTajik
East & Southeast Asia
Việt NamTiếng ViệtVietnamese日本日本語Japanese俄罗斯卫星通讯社中文（简体）Chinese (simplified)俄罗斯卫星通讯社中文（繁体）Chinese (traditional)
South America
BrasilPortuguêsPortuguese
NewsfeedBreaking
11:03 GMTPrince Andrew 'May Visit Pregnant Daughter' at London Hospital Amid Impending Sex Abuse Lawsuit
10:45 GMTLancet Letter Urges 'Objective Debate' on COVID Origins, Says Lab-Related Accident 'Plausible'
10:40 GMTShamima Begum Claims She'll Help Fight Terrorism in UK but Won’t Name Brits Who Joined Daesh: Report
10:21 GMT'Political Tourist': BJP's Bengal Chief Takes a Dig at Party Leader Who Joined Opposition Party
10:21 GMTTrump Slams ‘Dumbo’ Milley Over Secret Convo With PLA, Says ‘Never Even Thought’ to Attack China
09:44 GMTFrance Says Crisis in Relations With US Over AUKUS to Affect New NATO Concept
09:16 GMTIndia's All-Weather Border Outpost Project Fails to Take off as Ministries Spar With Each Other
08:56 GMTCIA Reportedly Warned US Military of Likely Presence of Children Near Afghan Drone Strike Target
08:56 GMTFrance, Russia Agree Modalities of Settling Champagne Import Controversy, Minister Says
08:28 GMTThere's No Unreleased Sex Tape of Kim Kardashian, Lawyers Say on Claims of 'Graphic & Better' Part 2
08:26 GMTMan Attacks Guards Over Refusal of Entry Without Health Pass in France, Reports Say
07:38 GMTAustralia Had 'Grave' Concerns Over French Submarine Capability, Prime Minister Says
07:33 GMTEight Dead, 7 Missing in China After Passenger Ship Capsizes
07:33 GMTBoris Johnson Slammed for 'Casual' Approach to National Security, 'Unclear Prioritisation of Risks'
07:16 GMTBritish Boxer Amir Khan 'Kicked Off' US Flight Over Row About Colleague's Face Mask
06:55 GMTAs US Prepares to Leave Iraq, Ex-Advisor to Iraqi President Says Kurds Need Reliable Partners
06:52 GMTTwo Women Arrested for Tearing Up Trump Signs and Snatching MAGA Hat From Child Escape Jail Time
06:46 GMT'F**k Joe Biden!' New Yorkers Take to Streets to Protest Vaccine Mandates, Link COVID Rules to Nazis
05:56 GMTAustralia May Rent or Buy Nuclear Subs From US, UK Until Its Own Fleet is Built Under AUKUS Deal
05:34 GMTColombia Condemns Maduro’s Participation in Celac Summit