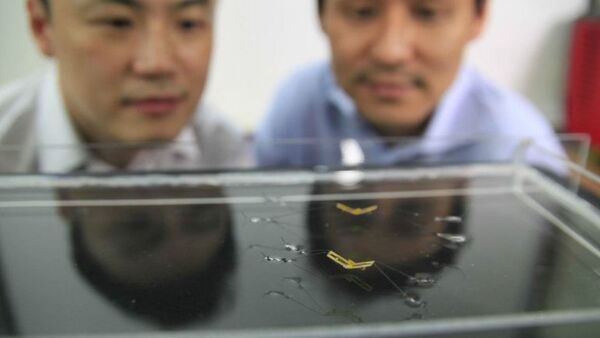 © Photo : Seoul National University
Subscribe
Scientists have taken inspiration from water striders and fleas to invent an amphibious robot which jumps on water.

Researchers have developed a tiny robot that is able to jump off the surface of water by mimicking the behavior of water striders, or skimmers, a kind of bug which has the unique ability to walk on water.

The team of scientists from Seoul National University [SNU] and Harvard University built the robotic insect using a 'pop-up' process of manufacturing, which takes sheets of laser-cut materials which are then layered and sandwiched together into a thin, flat plate that pops up into the complete electromechanical structure, like a pop-up book.

The insect moves thanks to a "torque reversal catapult mechanism," inspired by the way fleas can jump up to 150 times their body length. The bug uses enough thrust to jump off water, without breaking the water's surface, like a water strider.

"The water's surface needs to be pressed at the right speed for an adequate amount of time, up to a certain depth, in order to achieve jumping," said Kyu Jin Cho, Associate Professor of the Department of Mechanical and Aerospace Engineering at SNU and co-author of the study, published in the July 31 issue of the journal Nature.

"The water strider is capable of doing all these things flawlessly."

Semi-aquatic jumping robot
© Photo : Seoul National University
The work in making the robot also enabled the researchers to gain new insights into the natural mechanics displayed by water striders, which perform the complex locomotion despite a lack of complex cognitive skills, what they call "a form of embodied or physical intelligence."

The team discovered that water striders use a rotational movement of their legs, which have slightly curved tips, to help them spring from the water's surface.

"Using its legs to push down on water, the natural water strider exerts the maximum amount of force just below the threshold that would break the water’s surface," said the study's co- author Je-Sung Koh, of SNU.

By studying the embodied intelligence employed by water striders and fleas, the researchers hope that science can learn from such physical intelligence and build robots that have similar capabilities, which are able to perform complex movements without very complicated controls or artificial intelligence.

"Looking at nature is a good starting point to improving robot systems because they have already optimized their behavior through millions of years of evolution," said Je-Sung Koh, who explained that such robotic striders could be used in the future for search and rescue tasks, environmental monitoring, or military surveillance.