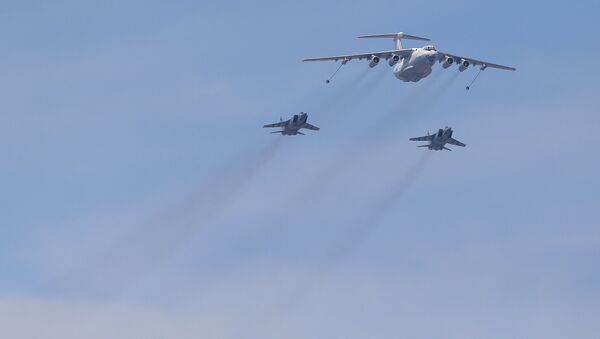 "The pilots from the Central Military District devoted the unique flight of MiG-31BM interceptor jets to today's opening of the International Army Games," Roshchupkin said in a statement.

The flight from Zabaikalsky Territory in Siberia to Perm Territory in Russia’s Ural is the first performed by a MiG-31 aircraft type, he added.

The crews which successfully performed the flight will be submitted state awards, he said.

Advanced Su-35, Su-30SM Jets to Be Deployed in Russia’s Western Regions
Russia hosts the first International Army Games organized by the Russian Defense Ministry on August 1-15. The competition brings together over 2,000 participants from 16 other nations. The contests will be held in 11 different locations across Russia.

The MiG-31, one of the world's fastest fighter-interceptors in service, has been the subject of a comprehensive upgrade to MiG-31BM standard.

The type is a long-range supersonic interceptor jet designed to intercept and destroy airborne targets at extremely low, low, medium and high altitudes.

The initial MiG-31 type was first used in Soviet Russia in 1981. The production of the aircraft was stopped in 1994 but it remains in service in the Russian and Kazakh air forces.