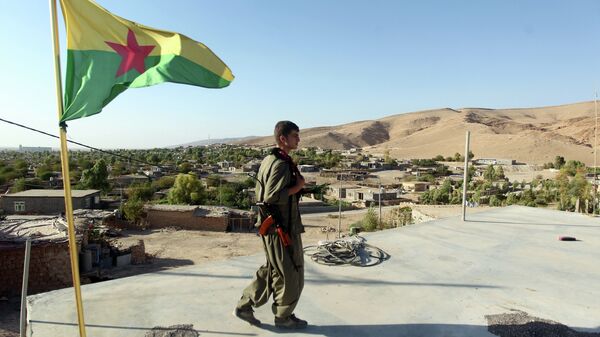 A State Department official says the United States would like Turkey and the Kurdistan Workers Party (PKK) to reboot a peace process that has been torn apart by escalating violence.

WASHINGTON (Sputnik) — The United States would like Turkey and the Kurdistan Workers Party (PKK) to reboot a peace process that has been torn apart by escalating violence, a State Department official told reporters.

“We [the United States] want to see a return to the resolution process, or the peace process rather,” the official said on Thursday when asked if the Turkish-PKK peace process fell apart completely after recent hostilities.

Last week, Turkey launched a two-front military campaign against the Islamic State in Syria and the Kurdistan Workers' Party (PKK) in northern Iraq following a suicide attack in the Turkish city of Suruc that killed 32 people.

Turkey's Role in Syria More About Countering Kurdish Expansion
US envoy to the anti-ISIL Coalition Brett McGurk, the official added, was in Ankara to talk about a range of issues with the Turkish government including tensions with the PKK.

On Thursday, PKK militants killed three Turkish soldiers in the southeastern province of Sirnak near the Iraqi border, the General Staff of the Turkish Armed Forces said in a statement.

The Turkish parliament rejected a proposal on Wednesday to create a commission to look into the recent terrorist attacks in the country.

The Turkish government has arrested 1,061 people across 39 provinces suspected of being connected to terrorist activities in the country, Turkish Deputy Prime Minister Bulent Arinc said at the meeting with McGurk.