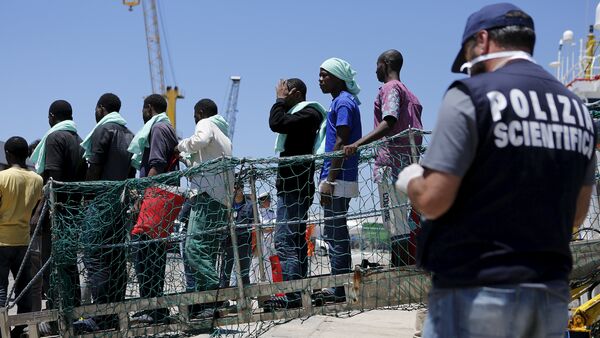 © REUTERS / Antonio Parrinello
Subscribe
A member of Italy's Lega Nord party claims that Italy risks losing its national identity if it chooses to continue to accommodate immigrants instead of improving the living standards of Italians.

MOSCOW (Sputnik), Svetlana Alexandrova – Italy risks losing its national identity if it chooses to continue to accommodate immigrants instead of improving the living standards of Italians, a member of Italy's Lega Nord party told Sputnik on Thursday.

Tens of thousands of undocumented migrants have come ashore in Italy and Greece since the start of 2015, as they attempt to flee war and poverty in North Africa and the Middle East. The surge in the number of refugees comes as Italy struggles with the aftermath of the 2007-2008 global financial crisis.

"We are losing our national identity because the authorities do not want to support the people of Italy, instead the government provides for migrants who have different beliefs, religions and lifestyles," Lega Nord’s Claudio D'Amico said.

Italian Court Awards $40,000 to Nigerian Migrant Over Adoption Law Breach
He predicted that fifty years from now, Italians may become a minority in their own country and stressed that it was unacceptable to accommodate economic migrants "when the country [Italy] is heavily affected by the economic crisis and its own citizens are living on the street."

"It is very costly to support immigrants in Italy," the lawmaker said, adding that economic migrants made up the majority of those arriving to the country.

Lega Nord’s deputy party leader, Sergio Divina, told Sputnik earlier this month that it costs Italy more to support migrants in Europe than to repatriate them and suggested stopping them from crossing over into Europe through bilateral agreements with their countries of origin.

In an effort to manage the more than 80,000 migrants that have already landed in Italy this year, the European Commission has proposed to relocate refugees to other member countries and launch a security operation in the Mediterranean to eliminate human trafficking operations there.