Austria Should Sanction US After Incident With Armed Soldiers - Lawmaker 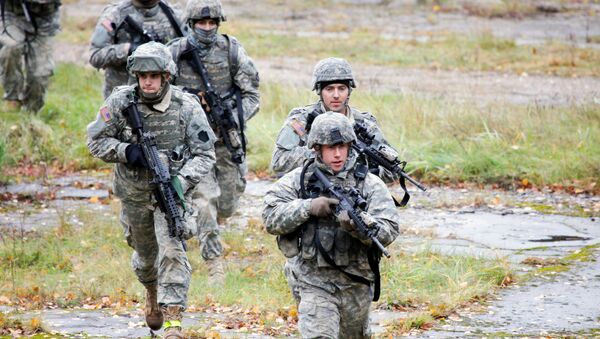 Armed US Soldiers Arrested in Vienna Airport on Their Way to Ukraine
MOSCOW (Sputnik) — Earlier in the day, local media reported that a group of nine US soldiers carrying M16 assault rifles and pistols were stopped in Vienna International Airport on their way to Ukraine. The group did not have permits to carry the weaponry, and had not declared them.

"I would like — I do not know if it will happen or not — our minister of foreign affairs or the federal chancellor to impose diplomatic sanctions against the United States or specific measures to restrict the movement of aircraft in relation to the United States," Hubner, a member of the right-wing Austrian Freedom Party, told SNA Radio.

US Marines en Route to Ukraine Lacked Clearance by 'Oversight'
Hubner added that such measures were "essential to maintain Austria's declared neutrality and self-esteem as a neutral state" since the US soldiers clearly violated Austrian law by bringing military equipment into the country without Austrian permission.

"Thus, in my opinion, the US government has violated [Austria's] neutrality, which no doubt is a serious crime," he stressed.

Ukraine has repeatedly requested lethal aid from the United States. Washington has denied the requests, saying that it would provide only non-lethal support to Kiev.

In February, Russian President Vladimir Putin said the Russian intelligence services had found evidence that the United States was supplying weapons to Kiev.