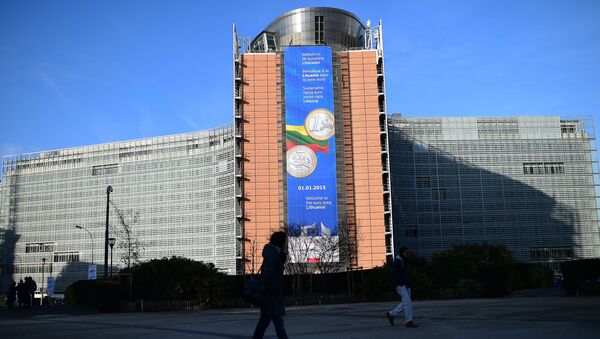 © AFP 2021 / Emmanuel Dunand
Subscribe
Press secretary for the European Commission said that talks between Greek authorities and the country's main creditors on the conditions for Athens to receive loans under the European Stability Mechanism (ESM) begin in Athens Monday.

Greece to Hold Bailout Talks With International Creditors Monday
BRUSSELS (Sputnik) – Talks between Greek authorities and the country's main creditors on the conditions for Athens to receive loans under the European Stability Mechanism (ESM) begin in Athens Monday, a press secretary for the European Commission said.

“Teams from the institutions are already on the ground in Athens and work is starting immediately, as we speak. So the negotiations on the memorandum of understanding should now progress as swiftly as possible,” Mina Andreeva said at a briefing.

She added that the lenders want Athens to conduct additional reforms in exchange for new credits — an issue currently under discussion.

Greece owes about $270 billion of its $350-billion debt total to its main creditors — the European Central Bank, the International Monetary Fund and some eurozone nations.

On July 13, the eurozone leaders agreed on a new bailout plan for Athens that envisages providing the country up to $95 billion over the next three years in exchange for strict austerity measures.

Earlier, Greek media reported, citing officials in the ministry of finance, that technical negotiations with Greece’s creditors were to begin on Tuesday.

Last week, a source in the Greece government told journalists that the main aim of Athens at talks will be to avoid having to adopt additional austerity reforms in 2015, apart from those to which the country has already agreed.