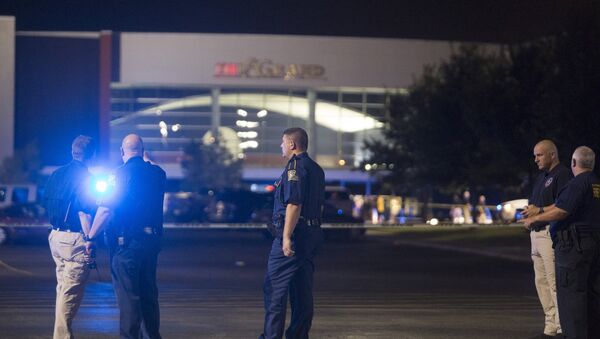 © REUTERS / Lee Celano
Subscribe
John Russel Houser, 59, from the US state of Alabama has been identified as the gunman in the fatal Lafayette, Louisiana shooting who is believed to have acted alone in the movie-theater on Thursday, Lafayette Police Chief Jim Craft said during a press conference on Friday.

“This is John Russel Houser, white male age 59… We don't know why he chose to stop and stay in Lafayette, he was staying in a local motel and we have very little information on him thus far.”

On Thursday evening, Houser opened fire at The Grand Theatre which resulted in at least three deaths and multiple injuries.

Craft said that two survivors had been released while the rest remain hospitalized.

Lafayette Police Investigate Bomb Threat After Movie Theater Shooting
Houser appeared to have been “drifting alone” and estranged from his family, the police chief continued.

US authorities found wigs and glasses in Houser’s motel, which could have been used as a disguise, Craft added.

Police said that Houser has a “very aged” criminal past with a previous arson and misdemeanor record, and had not been arrested in the past 10-15 years.

The shooting took place during the 7 p. m. Thursday showing of the "Trainwreck" comedy at The Grand Theatre in Lafayette, a city with a population of about 140,000 people located about an hour drive from Baton Rouge, the capital of Louisiana.