Russia has decided to extend the food import ban for purely pragmatic reasons rather than to hurt Europe even more, Prime Minister Dmitry Medvedev said.

MOSCOW (Sputnik) — In April, Russian Agriculture Minister Alexander Tkachev expressed hope that the country would be able to substitute at least 90 percent of food imports with domestic products in the next two or three years.

Russia has repeatedly stressed that Western sanctions are counter-productive and hurt not only the target country but those using the measure as well.

"This has nothing to do with inflicting pain on Europeans. The reasons behind this are strictly pragmatic," Medvedev said in an interview with Slovenian radio and television company RTV Slovenija on the eve of his visit to Slovenia on July 26-27.

"As you probably know, we are currently proactive in promoting import substitution in the food industry and developing domestic food production. Russia is a huge country; it has a huge agricultural sector, so we can surely provide for our needs in terms of food supply. Agriculture operates in one-year cycles, which enables producers to make plans for a longer term. This is the only reason behind this decision."

The prolongation of the one-year food ban came after the European Union, the United States and their allies extended the anti-Russia economic sanctions, imposed over Moscow’s alleged role in the Ukrainian crisis. 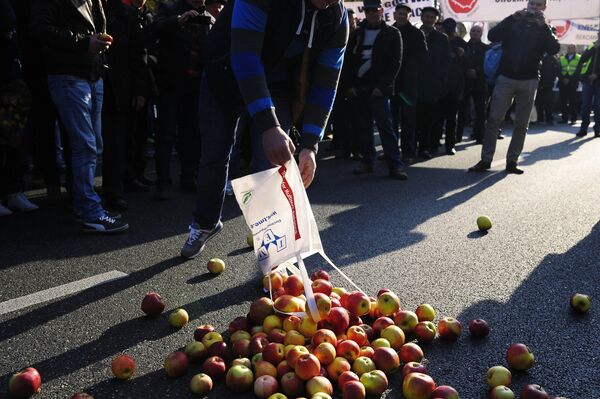 Polish farmers and horticulturists protest in Warsaw
© Sputnik / Filip Klimaszewski
/
Go to the photo bank
Newsfeed
0
Access to the chat has been blocked for violating the rules . You will be able to participate again through:∞. If you do not agree with the blocking, please use the feedback form
The discussion is closed. You can participate in the discussion within 24 hours after the publication of the article.
To participate in the discussion
log in or register
loader
Chats
Заголовок открываемого материала