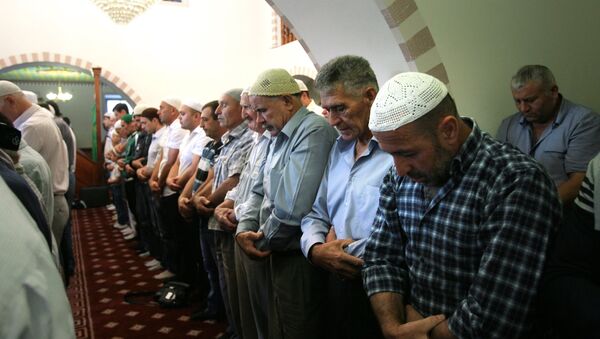 © Sputnik / Taras Litvinenko
/
Go to the photo bank
Subscribe
The European Union will seek to continuously portray the Crimean Turks, also known as Crimean Tatars, as an oppressed minority in Crimea and will use the conflict to drive a wedge between Turkey and Russia; the leaders of the two countries should take counter-measures, according to the website Deutsch Türkische Nachrichten.

The website Deutsch Türkische Nachrichten, or German Turkish News, has sent a warning signal to Turkey and Russia: it warns that the EU is seeking ways to drive a wedge between Ankara and Moscow.

Stop Politicizing Crimean Tatars Issue - Crimean Parliament Vice-Speaker
For the purpose, it will use the Crimean Turks, also known as Crimean Tatars, a minority ethnic group in Crimea. The union will portray the group as a constantly oppressed minority and will exploit the conflict to set the two countries at loggerheads. This, in its turn, could it could lead to a lasting destabilization of the Caucasus and Central Asia, the outlet warns.

Russia and Turkey, however, can easily solve the problems of Crimean Turks, the website says, by securing the cultural and linguistic freedoms of this indigenous minority, which predominated in the peninsula between the 15th and 18th century. Ankara and Moscow should closely cooperate in order to control potential separatist troublemakers.

Russia and Turkey should also stabilize their geopolitical "atria", otherwise there will always be a third party, which will constantly play either the religious, ethnic or ideological nationalist card to stir up one against another and weaken both states.

Reality Nuland Opts to Dismiss: 98% of Crimean Tatars Got Russian Passports
The website also noted that the EU is using double standards in its approach to ethnic minority groups. While paying close attention to Crimean Tatars, it dismisses the conflicts in the Middle East and Africa and breaks all the international legal norms in its policy on maritime refugees.

The Union has also closed its eyes, providing no reaction to heinous murder of Ukrainian opposition journalist Oles Buzina, who was gunned down near his home this past April by two masked gunmen.

What's right and what is wrong is finally determined by Brussels, the website states, adding that one can observe how European capitals are losing the sense of reality.