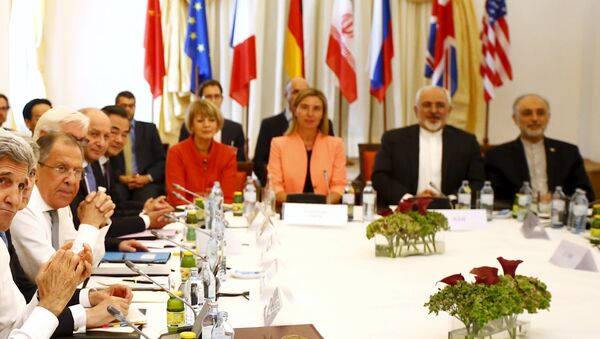 Retired Senior US Foreign Service Officer Dr. Nabeel Khoury claims that the Iran nuclear agreement could provide the leverage to bring together the United States, Russia, and Iran on a diplomatic resolution of the Syrian crisis.

WASHINGTON (Sputnik), Leandra Bernstein — The Iran nuclear agreement could provide the leverage to bring together the United States, Russia, and Iran on a diplomatic resolution of the Syrian crisis, retired Senior US Foreign Service Officer Dr. Nabeel Khoury told Sputnik.

“A little rapprochement with Iran, and Russian interests being taken into account, they could be brought into an agreement in Syria,” Khoury said.

He noted that such an arrangement between the three countries “is possible,” but it would require “a lot of diplomatic footwork on the part of the United States.”

One day after the July 14 signing of the nuclear agreement, President Barack Obama and Russian President Vladimir Putin spoke over the phone, where both expressed a desire to work together on the Syrian conflict.

“To move to a broader collaboration on conflict resolution in the region… that would be a real advantage of this agreement,” Khoury said of the nuclear deal with Iran.

Resolving the Syrian conflict could be the next big test in cooperation among the parties involved in the Iran negotiations, but it is not likely “in the near future,” Khoury said.

Iran: Farewell to the Pariah State
The Syrian civil war has been ongoing since 2011, resulting in more than 220,000 casualties, according to UN estimates. It has also allowed the Islamic State to gain ground and influence in the northeast part of the country.

Bridging the interests of the United States, Russia and Iran would require “a lot of flexibility” among countries who have opposing views on the conflict as well as on the Syrian government.

The United States has demanded an outcome in Syria based on the removal of Syrian President Bashar al-Assad.

Moscow has held two rounds of peace talks with members of the Syrian government and some opposition leaders.

In a Wednesday press conference, President Obama stated that the problems in Syria will not be solved without Russia, Iran, Turkey and US partners in the Persian Gulf playing a role.

Nabeel Khoury is currently a Senior Fellow at the Atlantic Council and the Chicago Council on Global Affairs, where he focuses his work on US national security issues and the Middle East.