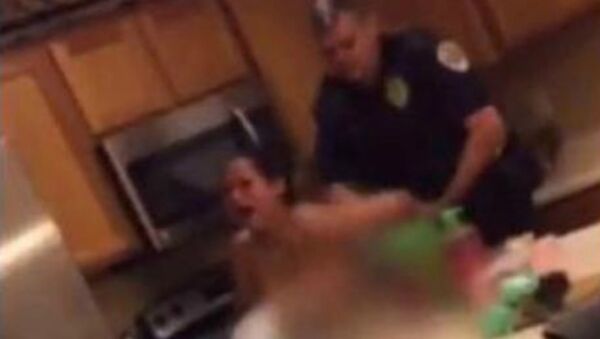 © YouTube/Sarah DusekHD
Subscribe
A woman who was handcuffed and arrested while naked after getting out of her shower says she’s planning to file a lawsuit against the city of Chandler, Arizona.

The incident began when police were called regarding an alleged argument between Esmeralda Rossi and her estranged husband.  Rossi was in the shower when police arrived.

“My daughter came to the shower and said there are two officers at the door. So I just grabbed a towel,” Rossi told the local ABC affiliate.

Rossi claims that upon meeting him at her door, Officer Doug Rose became very aggressive, so she asked him to wait there while she went to get her cellphone.  Rossi and her daughter both began filming the encounter.

“It made me very uncomfortable,” Rossi said. “So I closed the door. I turn to go into my living room, and I probably get about five steps in; and all of a sudden, I just hear boots running in after me, telling me stop or I’ll arrest you.”

Rose and another officer followed her into her living room.  Rose proceeded to arrest the woman as her towel fell and her daughter cried hysterically.

“Don’t take the attitude with cops, because we don’t play. When a cop shows up, you’re not the one in charge, I don’t care if it is your house, do you understand me?” the officer told Rossi as she stood naked and crying.  He repeatedly kept forcing her to look him in the eyes.

Rossi, who says she was a victim of molestation as a child, stated the incident brought back memories of the abuse she had suffered previously.

“When I was standing there … I felt like I was 7 all over again in a dark room with a man that is just staring at me,” she said.

The officer then made Rossi’s daughter remove the handcuffs after he lectured the woman for 20 minutes.

Following the incident, the other officer on the scene called his supervisor and raised questions about Rose’s actions, prompting an internal investigation, which determined that Rose had entered Rossi’s home illegally.  The officer had also failed to document arresting and un-arresting the woman, or the fact that she was naked during the encounter.

The investigation also determined that there was no video evidence of the incident from his body camera.

Despite all these findings of wrong-doing, there is no record of Rose being disciplined by the Chandler Police Department.  During the investigation, however, Rose retired from the force and received his full pension from the department.