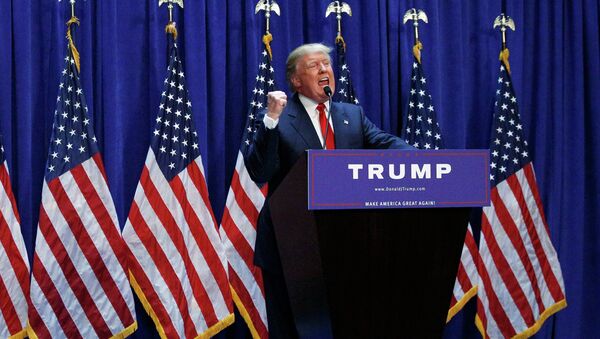 The final agreement on Tehran’s nuclear program will make Iran rich and will allow the country to spread its sphere of influence, 2016 US presidential candidate Donald Trump said on Wednesday.

WASHINGTON (Sputnik) — On Tuesday, Iran and the P5+1 group of countries — China, France, Russia, the United Kingdom, the United States and Germany – announced a final comprehensive agreement on Tehran's nuclear program in exchange for sanctions' relief.

“They are going to be so rich and so powerful,” Trump said on MSNBC’s morning news program.

“Their sphere of influence is going to be spread to lots of bad areas and lots of bad people.”

“I love the idea of a deal, but it was not a well-negotiated deal,” Trump commented. “We were dealing from desperation.”

The Crazy World of Donald Trump
Trump argued that “good points” of the deal were not strong enough and said he could have reached a much better agreement if he were the US president.

“We’re giving them so much,” he added. “Ultimately, they’re going to have nukes all over the place."

On Tuesday, US President Barack Obama said that Iran would dispose of 98 percent of its enriched uranium due to the reached agreement. Obama also argued the agreement would end the proliferation of nuclear arms in the Middle East.