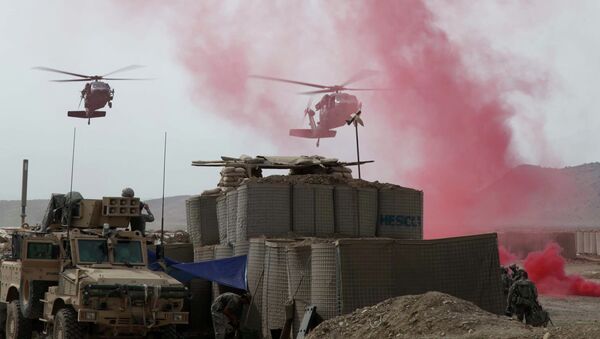 © Flickr / chuck holton/ U.S. Army Photo
Subscribe
International
India
Africa
President of the Association of Democratic Lawyers Afghanistan spoke to Sputnik Dari saying that NATO has asked the Afghan people to help fight the Taliban terrorists, demonstrating the Alliance’s failure to handle the situation on its own.

Head of the NATO mission in Afghanistan, General John Campbell, said that militants of the Taliban movement were responsible for 90 percent of civilian casualties.

The Commander also urged the Afghan people to stand up and speak out against Taliban attacks, whose victims are often women and children. In the context of the continuation of the NATO mission in Afghanistan, such a statement sounds like recognition of the Alliance's own incompetence in dealing with the terrorist threat.

Asia
NATO Peacekeeping Mission Ignores Afghan Drug Production
President of the Association of Democratic Lawyers Afghanistan, Mohammad Kabir Ranjbar, in an interview with Sputnik Dari said that NATO deliberately did not support the Afghan government in the fight against terrorism.

“I am sure that General Campbell out of despair urged the Afghan people to fight with the Taliban, as NATO has failed to deal with terrorism in Afghanistan,” Ranjbar told Sputnik.

“The 150,000 NATO soldiers who were present in Afghanistan could not finish the terrorism. Now when they are not more than just 13,000 it is no wonder that they cannot defeat the Taliban.”

According to the lawyer there are two explanations for what is happening in Afghanistan. The first reason is that most likely NATO command really thought it would be able to deal with the terrorist threat in Afghanistan, but overestimated its strength.

Secondly NATO officials deliberately confused the Afghans and the international community, setting ambitious goals in Afghanistan. “I do hope that their intentions were sincere,” added Ranjbar, “but the fact remains the same. Helping the Afghan government become real force, able to guarantee stability in the country was not achieved.”

“According to my sources, NATO has facilitated, and even paid for the ‘work’ of a number of Afghan political criminals in the hope that they can effectively support them in the fight against terrorism, using their connections. But this did not happen. The West miscalculated. The creation of a strong government in Afghanistan also failed because it was not possible to solve the problem of corruption in the higher echelons of power. On the contrary, the problem has become even more prominent, and has spawned a number of other issues,” Ranjbar concluded.