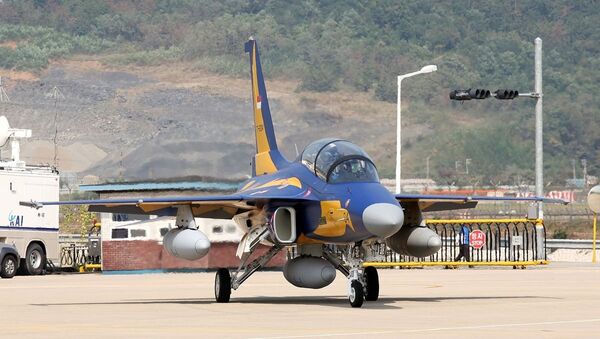 © Photo : Wikipedia / KAI
Subscribe
Indonesia has announced a plan to build a new military base in the South China Sea, according to the newspaper Jakarta Post.

Philippines Escalates Military Games with US, Japan in South China Sea
The Indonesian government is considering the construction of a new military base to protect the country's border areas near the South China Sea, Jakarta Post reported.

The issue was high on the agenda of a meeting of the Indonesian Defense Ministry and the country's National Development Planning Board (Bappenas), which discussed potential locations for the military base.

According to Bappenas chief Andrinof Chaniago, these include areas in Sambas, West Kalimantan, as well as the Natuna Islands, Riau Islands and Tarakan, North Kalimantan.

He said that the final decision on the location of the base will be announced by Indonesian President Joko Widodo in the immediate future.

For his part, the country's Defense Minister Ryamizard Ryacudu underscored the necessity of constructing a military base in the South China Sea.

"I previously worked in West Kalimantan and I believe that building a military base in that territory is a very good decision. We have natural resources that we need to guard," he was quoted by the Jakarta Post as saying.

Japan: New Chinese Islands Don’t Resolve South China Sea Tensions
While China, Malaysia, the Philippines and Vietnam lay claims to the South China Sea waterway, Indonesia has repeatedly said that it has no territorial interests in these waters.

The Chinese magazine National Interest has, meanwhile, argued that "Chinese maps in the past have shown Beijing’s nine-dash-line claims of sovereignty as including Indonesia’s Natuna Islands," something that understandably provoked severe criticism from Indonesian officials.

President Joko Widodo, in turn, said in March 2015 that Beijing's nine-dash-line claim "has no basis in any international law."