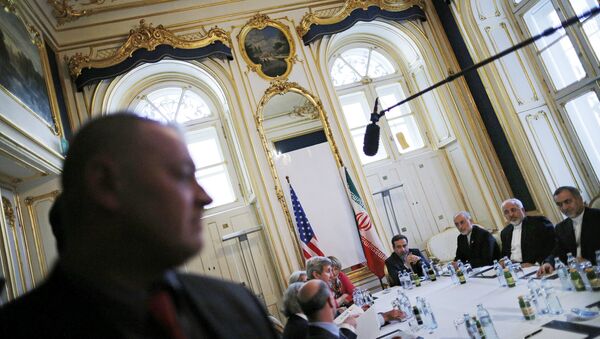 Difficulties at the Iran nuclear negotiations in Vienna are rooted in Washington's stance on lifting the arms embargo against Tehran, an Iranian source told Sputnik on Thursday.

MOSCOW (Sputnik) — The United States has introduced successive rounds of sanctions against Iran following the Iranian revolution in 1979, blocking almost all trade with the Islamic republic. They include bans on sales of weapons to Iran that can be used in its ballistic missile program.

"In particular, the United States voiced its opposition to removing the arms embargo… This is one of the main conditions for reaching an agreement," the source said, noting that Russia and China are in favor of lifting the embargo.

The source added that Russia and China – who are in the group of six negotiators together with the United States, Britain, France and Germany – spoke in favor of lifting the weapons sanctions, while the rest were in the US camp.

Another Iranian source at the talks told RIA Novosti earlier today that the consultations had been extended after Western negotiators toughened their position. They were also having trouble coordinating stances among themselves.

The P5+1 group of negotiators and Iran have twice extended their original end-of-June deadline to reach a comprehensive deal stipulating sanctions relief for the Islamic republic in exchange for assurances that the country's nuclear program is peaceful.