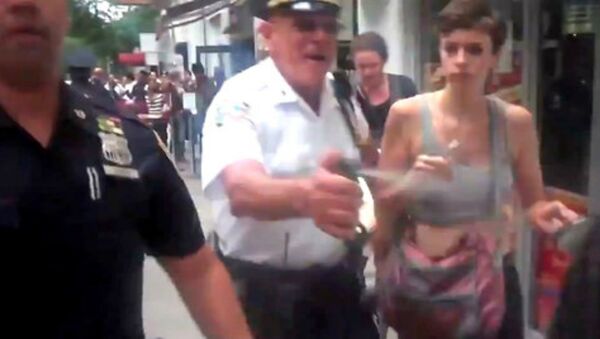 © YouTube/Charlie Grapski
Subscribe
Six protesters who were pepper sprayed by Deputy Inspector Anthony Bologna in an infamous Occupy Wall Street clash have all settled their federal lawsuits against the city. In all, $332,500 will be paid out in settlements.

Oakland Must Pay $1.3 million to Occupy Wall Street Protesters
"We think it's an amount that reflects that the city is aware that its actions were entirely improper," Mark Taylor, who represents three of the protesters, Damien Crisp, Kelly Hanlin and Julie Lawler, told the Associated Press.

Bologna was caught on video pepper spraying three of the women who were peacefully protesting in the city’s Union Square and posed no threat to him or others.  Following the incident, the inspector was docked ten of his vacation days and was transferred to Staten Island.

“Inspector Bologna acted that day consistent with his training and with no malice,” Deputy Inspector Roy Richter, the head of the union that represents senior uniformed officers, said in 2013. “He put himself on the line to do his job and his job was maintaining order in the City of New York.”

Two of the women, Jeanne Mansfield of Boston, and Chelsea Elliot of San Francisco, both settled their lawsuits for $60,000 each. Their settlements are the highest paid to date over police misconduct during the Occupy demonstrations in New York City.

Kaylee Dedrick of Albany, the third woman sprayed by Bologna, has settled for $55,000.  It is unclear why her settlement was $5,000 less than the other two women.

Despite costing the city all this money, District Attorney Cy Vance has maintained his refusal to prosecute Bologna.

The department told Newsday that settling the cases was “in the city’s best interest.”

While there are still lawsuits pending from police misconduct during this time, many settlements have already been paid out.

Some of the settlements include $583,000 to 14 protesters who were wrongfully arrested on New Year's Day, 2012; $230,000 that the city and Zuccotti Park's private owner are paying over allegations that a book collection was destroyed when the park was cleared in November, 2011; and $55,000 to a man arrested while shooting video at an Occupy demonstration, AP reported.