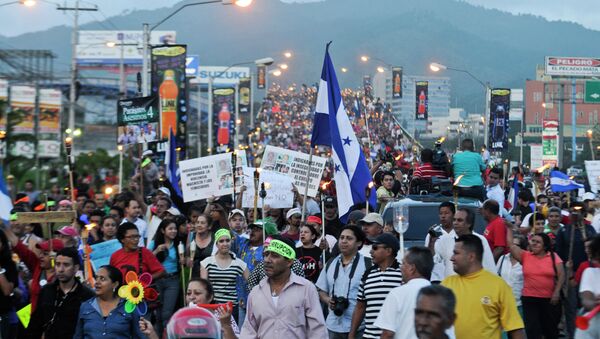 © AP Photo / Fernando Antonio
Subscribe
According to reports, some 60,000 people gathered in Honduras' capital of Tegucigalpa Friday to demand the resignation of the president.

Former Honduras President’s Son Transferred to US Over Cocaine Charges
MOSCOW (Sputnik) – Some 60,000 people gathered in Honduras' capital of Tegucigalpa Friday to demand the resignation of the president, Juan Orlando Hernandez, whom the protesters accuse of running corruption schemes, the Guardian reported Saturday.

According to the newspaper, Friday's protest was sixth in a row and so far the largest. The protesters were chanting “No more corruption, JOH out.”

Opposition in Honduras demands an independent investigation into the corruption scandal at the Honduran Institute of Social Security — a state body that administers social security services. Between 2010 and 2014, the Institute allegedly overpaid companies owned by government officials some $200 million.

President Hernandez earlier admitted that his presidential campaign received some $150,000 from companies linked to the scandal but said his party had no idea that the money was obtain illegally.