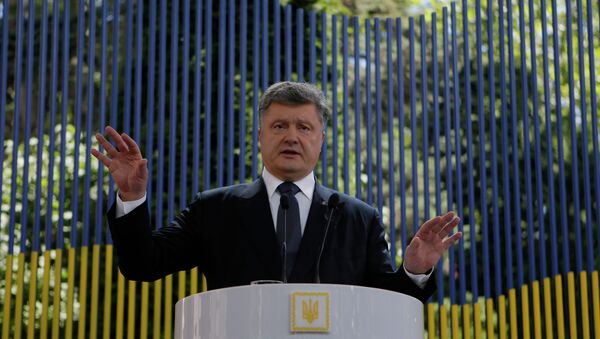 © AP Photo / Sergei Chuzavkov
Subscribe
International
India
Africa
President Petro Poroshenko has reiterated his promise that Ukraine will apply for EU membership within 5-6 years, stating that in this time the country must carry out systemic reforms and answer to EU criteria. However, experts suggest that Ukraine's entry into the supranational union will take a great deal more time, if it is possible at all.

"I am confident that within 5-6 years, Ukraine must change and meet with [Brussels'] criteria in order to apply for [EU] membership," Poroshenko stated Friday, prior to the start of talks with European Parliament President Martin Schulz, RIA Novosti Ukraina reported.

Last year, Ukraine signed an Association Agreement with the EU, a treaty which envisions a number of one-sided, structural reforms undertaken by Kiev aimed at 'creating a framework' for further cooperation with Brussels. In September, President Poroshenko also presented a series of reforms under his 'Strategy 2020', which, in his view, should prepare Ukraine for application for membership.

EU Eastern Partnership Commissioner: Ukraine Must Shoulder Costs of War
Despite the president's ambitious plans, experts suggest that Ukraine's membership in the EU may require a great deal more time, if membership is possible at all. They point out that the country's difficult economic situation, combined with Kiev's faltering reputation over the ongoing conflict in eastern Ukraine, makes it difficult to imagine that the country will be able to fulfill even the commitments it has agreed to under the Association Agreement, much less make preparations to joining the supra-national union.

Last month, Russian journalist, political analyst and Duma MP Alexei Pushkov stated that a "noticeable shift" has occurred in the EU's relations toward Kiev over the past years, with sympathy for post-Maidan leadership "waning," largely over the fact that Brussels "knows very well that the massive casualties among the civilian population in Ukraine's east are predominantly the result of shelling and military action on the part of the Ukrainian Armed Forces."

Also last month, EU Eastern Partnership Commissioner Johannes Hahn noted that the EU cannot take on responsibility for financing Ukraine's economy, especially in consideration of the ongoing conflict in the country's east. "It is not acceptable to us to have a situation where we have to permanently finance a country," Hahn noted at a speech before the Atlantic Council. The Commissioner added that Kiev faces not only the political and diplomatic challenge of ending the conflict, but also the difficult economic task of rebuilding from the conflict's catastrophic economic consequences.

In addition to requirements that candidate nations not have any ongoing internal conflicts and territorial disputes, the EU's terms membership include requirements that a country's national debt not exceed 60 percent of its GDP. According to IMF data, Ukraine's current debt levels stand at more than 100 percent of GDP, with some experts warning of an imminent default.

In March, the IMF approved a $17.5 billion bailout package for Ukraine, noting that additional funds will be required through 2018; the assistance is tied to structural adjustment of the Ukrainian economy, including cuts to government services and subsidies, which experts warn may lead to further economic decline and more misery among the country's impoverished population. Ukraine is still reeling from a dramatic decline in trade and financial ties with Russia, ties which had been formed over hundreds of years. Experts have suggested that while the Russian economy was capable of absorbing Ukrainian agriculture, together with its steel, machine-building and advanced engineering products, the EU market has no need for Ukrainian agricultural goods, or its turbines, airplane components or other industrial goods.

Association Does Not Mean Visa-Free Travel

One Year On: How Many Election Promises Has Poroshenko Kept?
During May's Eastern Partnership Summit in Riga, Ukraine signed further contractual agreements with the EU. Poroshenko also attempted to hide his disappointment over the EU's failure to grant Ukrainians visa-free travel rights, despite the fact that the Ukrainian government had complied with EU demands that Kiev create a new system of biometric passports. On the contrary, in the midst of an ongoing refugee crisis in the east of the country, EU countries have only tightened visa regulations for Ukrainians.
Newsfeed
0
Access to the chat has been blocked for violating the rules . You will be able to participate again through:∞. If you do not agree with the blocking, please use the feedback form
The discussion is closed. You can participate in the discussion within 24 hours after the publication of the article.
To participate in the discussion
log in or register
loader
Chats
Заголовок открываемого материала