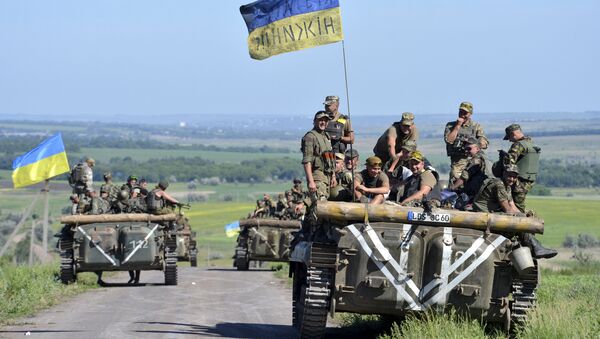 © REUTERS / Oleksandr Klymenko
Subscribe
International
India
Africa
An advertising campaign urging Ukrainians to take part in the deadly conflict in the southeast of their country is reportedly under way in the capital Kiev.

After Two Coups in Ukraine, US Takes Aim at Russia – Italian Media
Billboards calling on Ukrainians to go to war have appeared in the capital Kiev; billboard captions, in fact, liken participation in the hostilities to a computer game, media reports said.

"War: this is temporary. Learn to come back. Your dear ones are waiting for you", one of the billboards reads.

Other billboards purport that it is possible to jump-start your career by participating in the hostilities.

"New Horizons. All those who went through the war become successful," the slogan reads.

Each such billboard carries a contact phone number for the Kiev Union of Veterans of the Anti-Terrorist Operation.

Notably, there are no billboards warning that one can never return from the war.

In April 2014, Kiev launched a military operation against the Donetsk and Lugansk regions of Southeastern Ukraine, in which the local populations refused to recognize the national government which was established via Kiev's violent February coup d'état.

In Ukraine We Have Cold War Gone Hot – Kiev's Ambassador to Poland
According to the latest UN data, about 6,500 people have already been killed in the ensuing struggle. The settlement of the situation in the Donbass Region has repeatedly been on the table of the Minsk contact group, which adopted three documents on de-escalating the conflict.

In mid-February 2015, Kiev and the self-proclaimed republics of Lugansk and Donetsk signed a ceasefire agreement to bring an end to the armed conflict. However, both sides have since repeatedly accused each other of violating the deal.