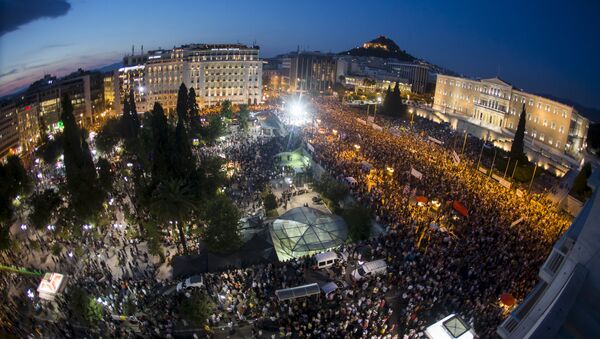 Thousand of demonstrators gathered outside Greece's parliament on Monday to express their support for Prime Minister Alexis Tsipras' anti-austerity stance in recent negotiations over the country's debt.

The Greek people are set to vote in a referendum on Sunday July 5 on whether or not to accept the demands of Greece's international creditors. Tsipras made the surprise announcement to put the deal to a popular vote late Saturday.

Demonstrators carried signs and banners reading "Oxi!" — Greek for "No!" — calling on the country to reject the latest offer from Greece's creditors.

"The government tried too hard to get this agreement. But the creditors kept asking for more. I don't know what else we are supposed to do," said pensioner Satroula Noutsou, who had joined the demonstrators, which police estimated at 13,000, in Athens' Syntagma square. "Tsipras is one of us, a regular person. And there are some people who don't like that."

The country's current bailout expires June 30, and the government has been pleading for an extension until the date of the referendum. A payment of 1.6 billion euros to the International Monetary Fund is also due on the same day — and the prospect that Greece will default makes the eventuality of an exit from the Eurozone even more likely.

The Greek people have been as surprised as the international lenders at the sudden turn of events, and many have queued up at ATMs to withdraw cash, as Tspiras announced Sunday that banks and the stock exchange would close for 6 days leading up to the referendum. After closing midday on Monday, ATMs reopened allowing withdrawals of  no more than 60 euros per day.

European Union President Donald Tusk conceded that "every government has a right to hold a referendum, therefore we respect the Greek decision."

"However, one thing should be very clear: if someone says that the government will have a stronger negotiating position with the 'no' vote, it is simply not true," said Tusk, adding "I'm afraid that which such a result of referendum, there will be even less space for negotiation."