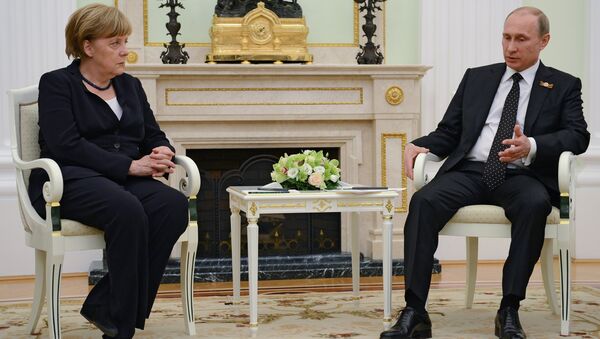 According to the former head of the German Committee on Eastern European Economic Relations, it is necessary to consider areas in which sanctions can be alleviated. He believes that this should be done as quickly as possible and that both sides should take parallel steps in this direction.

Russia and Germany have to start a constructive dialogue on the issue of sanctions relief, the former head of the German Committee on Eastern European Economic Relations Klaus Mangold told RIA Novosti on Sunday, at the opening of the 13th German-Russian conference of twin cities in Karlsruhe.

"We need as quickly as possible to consider the areas in which sanctions could be alleviated,” Mangold said.

He believes that the sanctions cannot be removed completely due to a long and complicated decision-making process in the EU as well as close European ties with the United States. However, the sanctions should be eased as much as possible, especially in the financial area, he argued.

“[…] We have no interest […] in weakening the Russian industry, or that German companies continue to lose export revenues. A constructive dialogue on the issue of sanctions relief is required," Mangold said, adding that the first step should be taken by both sides.

Anti-Russian Sanctions Put 150,000 Jobs in Germany at Risk
"It is possible. The point is that Russia should change its embargo policy on agricultural products. For our part, we have to do something with our sanctions. This work must go hand in hand. This is the only way it can succeed," Mangold said.

Since March 2014, Western countries have repeatedly imposed sanctions against Russia because of its position in the Ukrainian conflict. On June 22, 2015 the economic sanctions were extended until January 31, 2016.