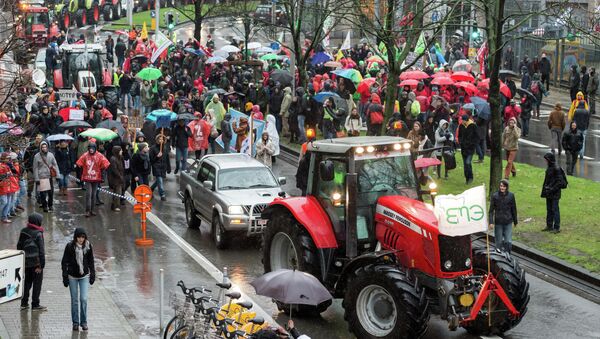 Hundreds of local farmers rallied in the streets of Erfurt Friday accusing the government of not doing enough to compensate for the lost markets for products Moscow has banned from being imported in retaliation for the EU sanctions, Sueddeutsche Zeitung wrote.

German Farmers Lose €600 Mln From Anti-Russian Sanctions
The Russian ban on food imports from Europe dealt a devastating blow to German agriculture, sending prices on some produce tumbling down, with the head of the German Farmers’ Union, Joachim Rukwied, saying that the farmers were bearing the brunt of the anti-Russian sanctions.

German farmers suffered nearly €600 million in losses in 2014 after Russia banned European Union food imports in a tit-for-tat move for sanctions imposed on it over Ukraine.

In August 2014, Russian President Vladimir Putin announced bans or limits on food and agricultural imports from countries that had imposed sanctions on Russia over its alleged involvement in the conflict in eastern Ukraine.