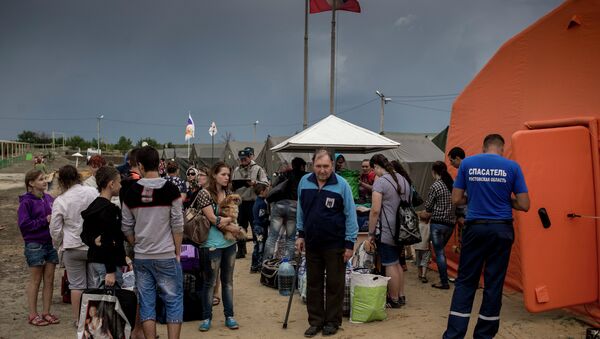 A total of 1.35 million of Ukrainian citizens were registered as internally displaced persons. The majority of those who fled the country found shelter in Russia.

Farewell to Arms: Over 10,000 Soldiers Desert Ukrainian Army
MOSCOW (Sputnik) — More than 900,000 Ukrainians have fled conflict in the country since the beginning of a military operation in April 2014, the Office of the UN High Commissioner for Refugees (UNHCR) said in a report.

"According to government sources in receiving countries, the total number of people seeking asylum or other forms of legal stay in neighbouring countries now stands at 900,300, with the majority going to the Russian Federation (746,500) and Belarus (81,200)," the report issued Friday read.

Besides Russia and Belarus, the list of host countries includes Germany, Poland, Italy, Sweden, France and many other European countries, according to the report.

US Cynically Disregards Human Rights Crisis in Ukraine
Moreover, a total of 1.35 million of Ukrainian citizens were registered as internally displaced persons (IDPs), the report said.

The Ukrainian conflict escalated in spring 2014, when Kiev launched a military offense to suppress independence supporters of eastern Ukraine for refusing to recognize a coup-imposed government.

Eastern regions of Ukraine are still facing a severe humanitarian crisis in spite of the fact that the warring sides signed a ceasefire deal in February. Local residents leave their homes for fear of being killed or injured amid ongoing hostilities.