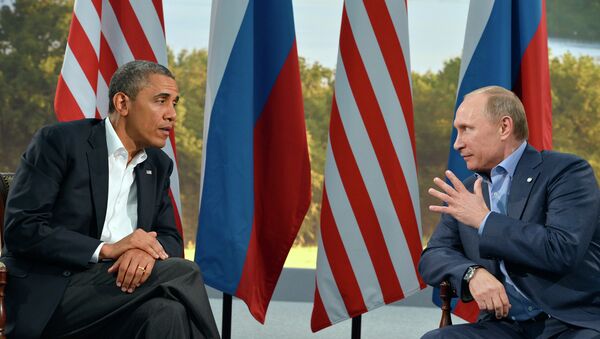 © AFP 2021 / JEWEL SAMAD
Subscribe
Washington is exploiting the conflict in Ukraine to isolate Russia from Europe and assert its interests in the European Union, a member of the European Parliament from Austria Harald Vilimsky told Sputnik on Friday.

MOSCOW (Sputnik) — According to the lawmaker, Washington seeks to drive a wedge "between Russia and Europe, knowing that a potential conflict, or even a war, will not happen on its borders, so the United States will win anyway."

"The United States wants to isolate Russia from Europe for good."

Vilimsky added that those politicians in the European Union who favor closer cooperation between the EU and NATO, claim that a military alliance with Washington falsely guarantees the protection of Europe from President Vladimir Putin's Russia.

But in reality, Vilimsky pointed out, "these same politicians did not need any protection from Putin or Putin's Russia before the events in Ukraine."

"On the contrary, Russia was always a welcome business partner and investor."

According to Vilimsky, by introducing sanctions against Russia, the European Union "not only shoots its own foot, but is blocking new diplomatic solutions" of the Ukrainian crisis.

The lawmaker stated that the only way to a peaceful solution is "the lifting of sanctions on the one hand, and a mediating policy of the EU members, independent from the influence of third states."

Relations between Russia and the European Union, the United States and a number of other countries have become strained over the crisis in Ukraine.

Western countries have imposed several rounds of sanctions against Russia, accusing it of escalating the Ukrainian conflict — a claim which Moscow has repeatedly denied.