Obama Eulogy: US Blind to Mayhem of Gun Violence 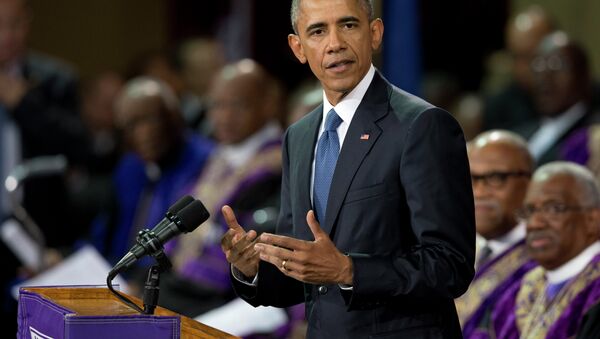 US President Barack Obama gave the eulogy speech at the funeral service for pastor Reverend Clementa Pinckney, one of nine African-Americans fatally shot in the attack on a Charleston, South Carolina church on June 17.

WASHINGTON (Sputnik) — The United States has ignored the consequences of systemic gun violence and mass shootings in the country, President Barack Obama said during his speech.

“For too long we have been blind to the unique mayhem that gun violence inflicts on this nation.”

The president said that, that in the wake of mass shootings such as last week’s church massacre in Charleston, but also the deadly shootings in recent years at the Aurora theater in Colorado at Sandy Hook Elementary School in Connecticut, “sporadically our eyes are open.”

He continued: “I hope we also see the 30 precious lives cut short by gun violence in this country every single day.”

On June 17, 2015, Pinckney was shot dead together with eight other African-Americans at the historic Emanuel African Methodist Episcopal Church by 21-year-old Dylann Roof, who has been linked to an online manifesto touting racist, white supremacist beliefs.

The US Confederate flag stands as a symbol of oppression and racial injustice in the United States, President Obama added.

"As we all have to acknowledge the [Confederate] flag has always represented more than just ancestral pride, for many black and white that flag was a reminder of systemic oppression and racial subjugation, we see that now."

Obama’s remarks on the Confederate flag come as numerous US companies and lawmakers have called for its removal since the deadly Charleston church shooting.

The US president said that although the “flag did not cause these murders,” removing it would be an “acknowledgement that the cause for which they [Confederate soldiers] fought, the cause of slavery was wrong.”

"It would be one step in an honest accounting of America’s history, a modest but meaningful balm for so many unhealed wounds. It would be an expression of the amazing changes that have transformed this country and this state for the better."