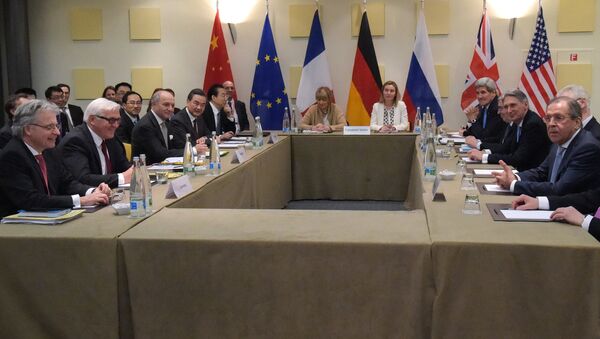 © Russian Foreign Ministry
/
Go to the photo bank
Subscribe
Washington has announced US Secretary of Energy Ernest Moniz and Under Secretary for Political Affairs Wendy Sherman will accompany Secretary of State John Kerry to the Iran Nuclear Talks in Austria scheduled to start on Friday.

P5+1, Tehran Focus on Technical, Legal Aspects of Iran Nuclear Deal
WASHINGTON (Sputnik) — Iran and the six international negotiators, comprising the United States, China, France, Russia, the United Kingdom and Germany, have to reach a deal, securing the peaceful nature of Tehran's nuclear program in exchange for easing of sanctions before the June 30 deadline.

In April, the P5+1 and Iran reached a political framework deal on the issue.

“In the context of the EU-coordinated P5+1 negotiations with Iran, Secretary Kerry will be joined in Vienna, Austria, on June 26 and onwards by Secretary of Energy Ernest Moniz, Under Secretary for Political Affairs Wendy Sherman, and the US negotiating team,” the US Department of State press release said on Thursday.