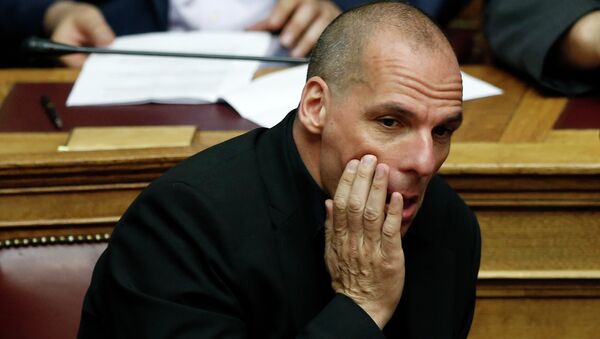 Alexander Mercouris
London-based lawyer
All materials
As Greece squares off with its creditors one episode more than any other explains the nature of the crisis.

According to what might be an apocryphal story, just after the election that brought Syriza to power, the finance ministers of Greece and Germany, Yanis Varoufakis and Wolfgang Schauble, had a meeting.

“I am elected,” Varoufakis told Schauble, as he demanded that Schauble accept his demands. “So am I,” Schauble fired back.

'Those Who Invest in Crisis Will be Disappointed': Tsipras on Greece Debt
The EU presents itself as a democratic union of equal democracies, underpinned by solidarity between its members.

The preamble of the Treaty of the European Union speaks of the EU states “confirming their attachment to the principles of liberty, democracy and respect for human rights and fundamental freedoms and of the rule of law.”

“The Union shall respect the equality of Member States before the Treaties as well as their national identities, inherent in their fundamental structures, political and constitutional, inclusive of regional and local self-government… Pursuant to the principle of sincere cooperation, the Union and the Member States shall, in full mutual respect, assist each other in carrying out tasks which flow from the Treaties.”

The reality, as the exchange between Varoufakis and Schauble shows, is that the EU is no such thing.

Far from being a democratic union of equal democracies in which each helps the other, the EU is in reality a layered cake, with some democracies above the others.

Grexit From Euro Will Mean No More EU Money for Athens – Martin Schulz
The Greek crisis is a case in point. German political imperatives have prevailed over economic rationality and the interests of Greece and the eurozone.

When the Greek crisis began back in 2010 the representatives of the non-Western states on the IMF’s board spoke out strongly against what the EU led by Germany proposed — an imposition of austerity coupled with more debt. They all said that this would cause an economic crisis in Greece whilst saddling the country with debts it could never repay.

The problem was that what made economic sense did not make political sense in Germany.

The Germans were not prepared to write-off Greece’s debts. That would have set a bad example that might have led to more debt write-offs in other EU states.

That could have hit Germany’s banks — with politically unacceptable consequences in Germany. However since Greece had to be bailed out to save Germany’s banks, austerity had to be imposed to win political support for the bailout from the German public.

Though this formula made no sense since it has locked Greece into perpetual recession, because Germany’s democracy is “more equal” than that of Greece, its view prevailed.

Russia to Build New Gas Pipeline to Germany
What is not sustainable economically is not sustainable politically. So it has proved. However despite the failure of the policy, the political imperatives that led to it in Germany are unchanged. That is why Germany insists on continuing with it.

The same has been true on other issues.

So far from being a democratic union of equal democracies the EU looks increasingly like the tyranny of the stronger over the weaker.

One is reminded of the words of Thucydides, the great ancient Greek historian:

“Right, as the world goes, is only in question between equals in power, while the strong do what they can and the weak suffer what they must”.