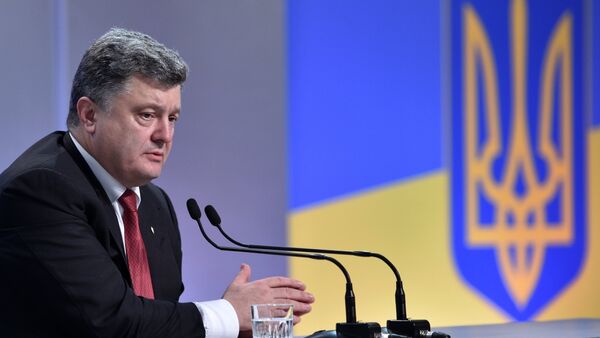 Earlier this week, Poroshenko said that the law on "the removal of the presidential title from Viktor Yanukovych" was unconstitutional and illegitimate. The episode confused a lot of people, since Poroshenko himself actively supported the Maidan protests in Kiev that resulted in the illegitimate overthrow of Yanukovych's government.

The removal of Yanukovych from the office without impeachment and constitutional approval created a mechanism that in the future can be applied against Poroshenko himself, Portnov said on his Facebook account.

"Petro Poroshenko permitted the removal of presidential status [by a simple decision of the Verkhovna Rada, as in the case of Yanukovych], and therefore the parliament could do the same thing to him," Portnov said, adding that the current President is worried about his own fate more than anything right now.

Confusing U(kraine)-Turn: Yanukovych Ousting Was Illegitimate - Poroshenko
The leader of Ukraine's Radical Party Oleh Lyashko couldn't hold back his anger after Poroshenko's decision. Lyashko, known for his loud-mouth and eccentric antics, said with policies like that Ukraine will soon see the return of Yanukovych to the Verkhovna Rada.

Last year, Yanukovych became the scapegoat of Ukrainian politics after his government was accused of causing all the misfortunes in the country. Now, more than a year after the former president was ousted, his legacy remains. Mikheil Saakashvili, the new governor of Ukraine's Odessa Region, said that in the best case scenario, Ukraine will need 20 more years to reach the economic level of Yanukovych's government in 2013.