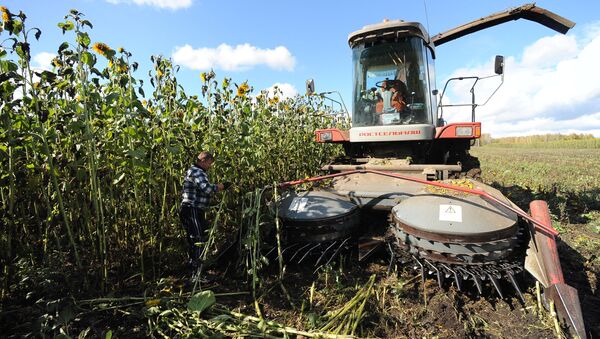 "Every political incident has its downside and its good side…. But the current situation also gives opportunities for small [Russian] producers to increase their productivity to be more effective and efficient and have access to the Russian markets, so there could be an advantage there," Kanayo Nwanze said.

Russia-Americas Ties, Arctic to Be Discussed at St.Petersburg Forum Friday
He added that Russian agricultural producers need to invest in IT technologies that increase productivity to realize the country’s "huge agricultural potential."

On Thursday, the head of Russia’s agriculture Rosselkhoznadzor watchdog agency, Sergei Dankvert, said that Russian agricultural producers had called on authorities to expand the list of banned import foodstuffs if economic sanctions against Russia were extended.

Nwanze also said that Russia’s active ongoing contribution to the IFAD is vital for the UN agency.

"I must say to you I’m very exited about Russia joining IFAD. Russia became a member of IFAD only in 2014 but Russia increased its financial contribution to IFAD by 50%, it went from 6 to 9 million dollars," Nwanze said.

According to the agency president, Russia's contribution is especially important since IFAD actively works with Commonwealth of Independent States (CIS) countries.

"In 10 of these countries, we have financed 40 projects for a total of 500 million dollars," Nwanze added.

The economic forum in St. Petersburg, taking place June 18-20, is held under the auspices of Russian President Vladimir Putin.