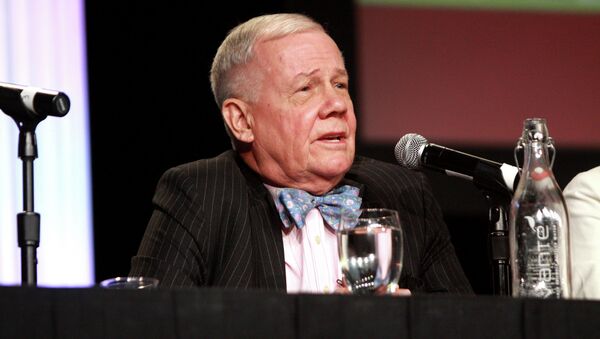 Despite the Western efforts to discourage investors from participating in the St. Petersburg Economic Forum, the affair is in full swing. Jim Rogers, legendary investor and chairman of Beeland Interests, is in attendance, and he told Radio Sputnik that the Russian economy may be the most promising market for fellow investors.

"Well, it’s gonna change the world," Rogers says when asked about the role of the BRICS Bank. "You know, the world has been dominated by IMF, World Bank, and other American-controlled institutions, and that’s never good, that only one players in charge of everything. So now we’re going to have competition…

"This will be very good for the world," he adds.

Speaking with Radio Sputnik, Rogers notes how the United States economic actions are driving other together, in particular Russia and China. In the long-term, that new economic alliance can only hurt the US, as it continues to impose unfair sanctions.

"I suspect even Japan, eventually, will be closer and closer to Russia, just because they need to. That’s where the transportation will be, that’s where the natural resources are," he says. "Go east, don’t go west."

"Putin is trying to encourage people to invest in the stock market. The more of that, the better."

Part of Russia’s strength comes from its natural resources, and not only in oil and natural gas, but also in even more essential resources, like water and timber.

Rogers also expresses his support for the Trans-Pacific Partnership deal, saying he supports all open and free trade agreements.

He did, however, express misgivings about the way the Obama administration has gone about promoting the TPP deal.

"Unfortunately, for some reason, the Trans-Pacific Partnership, they won’t tell us what’s in it. America’s supposed to be this open and transparent democracy, and here they are passing a bill where they won’t even tell the people who are voting for it what’s in it.

"Which is peculiar and worrisome to me as an American citizen…" he adds.

When asked specifically about what investments to watch for in the future, Rogers offered sage advice.

"I was bearish on Russia for forty-seven years, and the last couple of years Russia has changed, so I’m changing," he said.

"If you can invest in change, and you buy it at a good price, you’re probably going to make a lot of money."