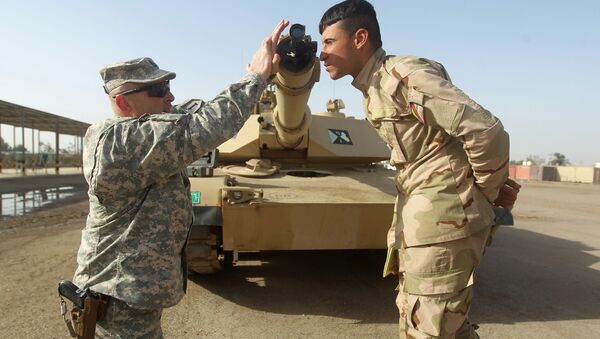 © AFP 2023 / AHMAD AL-RUBAYE
Subscribe
International
India
Africa
The United States objective against the Islamic State in Iraq is not winning a victory, Chairman of the US Joint Chiefs of Staff told Congress on Wednesday.

US-Led Coalition Launches 11 Airstrikes Against Islamic State
WASHINGTON (Sputnik) — During a Wednesday House of Representatives Armed Services Committee hearing, legislators were critical of President Barack Obama for not having a strategy or clear objectives in the fight against the Islamic State.

“If you are asking, ‘Is the United States winning,’ that is the wrong question,” Martin Dempsey, Chairman of the US Joint Chiefs of Staff, said when asked about the US objectives in the fight against the Islamic State.

Dempsey explained that the US military action in support of a 60 nation coalition against the Islamic State “is a far different approach than if we were to decide ourselves that it is our responsibility to defeat ISIL [Islamic State] inside of Iraq.”

The current US objective is “to deliver what we committed to deliver, which is security forces,” Dempsey added.

US Has ‘No Specific’ Plans to Build More Military Bases in Iraq
On June 10, 2015, President Barack Obama announced the deployment of an additional 450 US troops to help train the Iraqi Security Forces as well as a new recruits in Anbar province.

Obama came under sharp criticism during the Group of Seven (G7) conference earlier in the month when he admitted that the United States does not have “a complete strategy” for the training of Iraqi forces against the Islamic State.