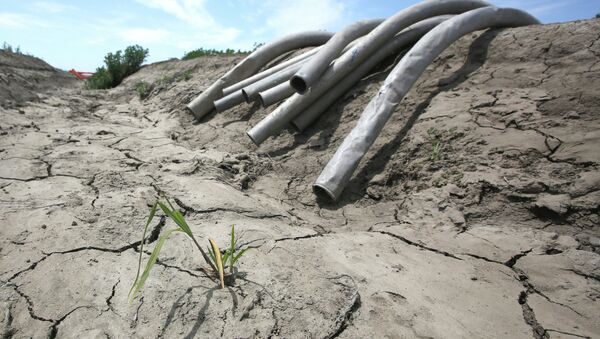 'Drought-Shamed' Super Wealthy California Residents Refuse to Cut Water Use
The world's aquifer systems are being drained faster than they can be replenished, according to satellite images analyzed in studies carried out by NASA and the University of California, and the amount of water contained in them is unknown.

Data from NASA's Gravity Recovery and Climate Experiment [GRACE] satellites shows that between 2003 and 2013, 13 of planet's aquifers were receiving little or no replenishment while being depleted.

Aquifers, reservoirs for groundwater, are underground layers of rock saturated with water which comes to the surface through natural springs, or is pumped to the surface from a well.

The world's driest areas, where populations rely heavily on water that is drawn from underground systems, were the worst affected. The most overburdened in the world is the Arabian Aquifer System, which is used by 60 million people as a water source.

The second most overstressed is the Indus Basin aquifer of northwestern India and Pakistan, while the third was the Murzuk-Djado Basin in northern Africa.

"Available physical and chemical measurements are simply insufficient," explained Jay Famiglietti, a water scientist and principal investigator for the study, published on Tuesday in the journal Water Resources Research.

"Given how quickly we are consuming the world's groundwater reserves, we need a coordinated global effort to determine how much is left."

Estimates of time to depletion, say the scientists, vary wildly, from millennia to decades. The discrepancy in projections for the overstressed Northwest Sahara Aquifer System ranged from 21,000 years, to just ten.

"What happens when a highly stressed aquifer is located in a region with socioeconomic or political tensions that can’t supplement declining water supplies fast enough?" asked Alexandra Richey, the leading author of both studies.

Global Warming a Catalyst in Syrian Civil War
In November 2014, Famiglietti, a senior hydrologist at the NASA Jet Propulsion Laboratory, warned of the geopolitical consequences of declining water supplies, writing in a Nature commentary that "groundwater depletion the world over poses a far greater threat to global water security than is currently acknowledged."

"Crucial supplies of water in China, the US, India and other major economies are dwindling so fast that the threat to the world’s water security is far worse than is commonly understood."

In a study published in March in the journal Proceedings of the Academy of Sciences, climatologists from the University of California suggested that the 2007-2010 drought in Syria, the worst in the instrumental record, was a catalyst for the "population shock" in urban areas of Syria which contributed to the unrest which led to the country's current civil war.

According to the study, urban areas of Syria, already burdened by an influx of Iraqi refugees, were flooded by a as many as 1.5 million migrants fleeing the drought, which affected previously arable land in the east and northeast of Syria, part of the Middle East's Fertile Crescent of arable land.