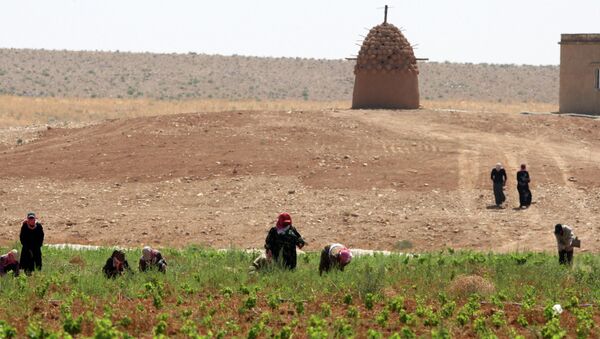 © AP Photo / Mohammad Abu Ghosh
Subscribe
A study from climate scientists finds that droughts caused by climate change had a "catalytic effect" on the political unrest in Syria.

US, Coalition Conduct Nine Airstrikes Against ISIL in Syria, Iraq
A study published by climatologists on Monday has made the link between a drought in Syria caused by changing climate, and the 2011 uprising which lead to extended internal conflict and the civil war which continues to this day.

According to the study, published in the journal 'Proceedings of the Academy of Sciences,' the 2007-2010 drought in Syria "was the worst drought in the instrumental record, causing widespread crop failure and a mass migration of farming families to urban centers."

As a result of the drought, agricultural production dropped by a third and as many as 1.5 million people fled the large tracts of agricultural land in eastern and northeastern Syria, which comprise part of the Fertile Crescent of moist and fertile land in the Middle East, and migrated to urban areas, particularly those of Damascus, Aleppo, Homs and Latakia, which had already absorbed an influx of refugees from the Iraq war.

"There was a huge population shock in a very short period of time in these urban areas, which were already marginally sustainable in terms of their resources," the lead researcher on the study, Colin Kelley of the University of California at Santa Barbara, said in a university press release.  "The combination of large acute geographic and demographic changes created a huge vulnerability."

The scientists were able to observe a "long-term drying trend," in the Fertile Crescent, which "tended to make multiyear droughts, which occur naturally in this area from time to time, much more severe and explains why this recent drought was the most severe during the preserved record."

America's Favorite 'Moderate' Syrian Group Disbands
According to their investigations, since 1900 the area has warmed 1 – 1.2 degrees centigrade, with a reduction in wet-season precipitation of about 10 percent. During typically hot summers, higher temperatures increased the evaporation of moisture from the soil, and in the wet season, weakening wind patterns brought less wet air from the Mediterranean, where the study also observed long-term warming, and long-term rising mean sea-level pressure.

Using satellite images, the researchers also detailed the impact of government policies on farming practices and the availability of groundwater, as government subsidies for wheat production prompted farmers to over-pump groundwater which could have been used for the irrigation of land in the event of declining rainfall.

A study published in the Journal of Hydrology last year also investigated the impact of the Syrian government's agricultural policies on the availability of water, concluding that groundwater policies "focused on short-term gains in agriculture," with fuel and crop subsidies contributing to a "rapid decline in groundwater resources," and their unsustainable use.

The authors of Monday's study warn that according to their models, a severe drought such as that implicated in the Syrian conflict "has become more than twice as likely as a consequence of human interference in the climate system."

A 2008 study from Japan's Meteorological Research Institute made the first full projections of rainfall and streamflow for the Fertile Crescent, which is known as 'the birthplace of agriculture.' According to its model, by the end of the current century, the Crescent "will lose its current shape and may disappear altogether," while the flow of Euphrates River will decline by up to 73 percent.