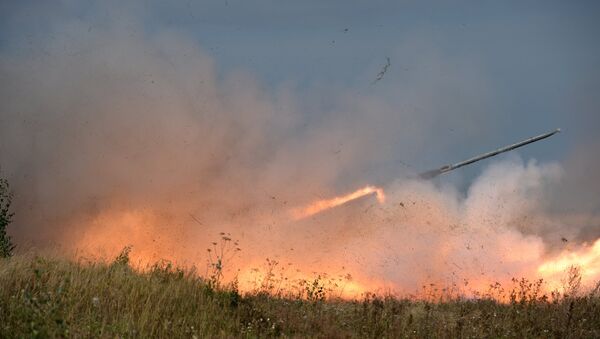 © Sputnik / Pavel Lisitsyn
/
Go to the photo bank
Subscribe
Belarus tested its new Polonez rocket launcher system in China, which has a considerably greater range than Soviet-made Smerch systems and could indicate a secretive development between the two countries which lasted over a decade.

Very little is known about the system, which was first publicly presented at the May 9, 2015 Victory Day Parade in Minsk. The system's publicly declared specifications, which promise a range of up to 200 kilometers, are similar to those of the Chinese Norinco AR3 MLRS first presented in 2011. The information could indicate that Chinese-Belarusian military cooperation on the project took place secretively for some time.

China, Belarus Sign 20 Documents to Deepen Cooperation
The release about the test also accompanied a cryptic statement from President Lukashenko about the tests with regards to the country's cooperation with Russia.

"Our ally Russia is not so active in supporting our aspirations. We will talk about this separately with the Russian President. But thanks to the Chinese People's Republic and its leadership for this support," Lukashenko said.

The system is said to be designed in Belarus, which does not produce missiles itself but does have experience producing chassis for such systems at the Minsk Wheel Tractor Plant (MZKT). However, Belarus and China have cooperated on chassis systems at the plant since 1998, when it began producing chassis for Chinese CJ-10 cruise missile and DF-11 ballistic missile systems.

Cooperation deepened in 2010, when China built a kraft pulping plant for producing cellulose, used to make propellant for solid-fuel rockets including Chinese Weishi rockets' HTPB propellant. The two countries also agreed to build an industrial park in Belarus and another one in China's Changchun.

In 2011, Belarus and China further deepened military cooperation which involved the development of new types of military equipment. At the time, China's Defense Ministry disclosed that it was working with Belarus on surface-to-air missile systems, for which Belarus makes automation equipment. The agreement specifically touched on the development of missiles.

As of 2013, China and Belarus were known to be cooperating on modernizing Soviet-made Smerch MLRS systems. As such, the Polonez could indeed be a Belarusian development made as part of its cooperation with China, although it is rumored to be using Chinese A200 rockets.

Wary of NATO, Belarus Begins Ukraine Border Drills
In the release regarding the MLRS test, Lukashenko stressed that NATO activity on the border with Belarus is increasingly worrying.

"They constantly publicly demonstrate their activity most of all at our borders. This activity can't not alert us," Lukashenko said.

Lukashenko added that Belarus also considers the upsurge in NATO activity a "propagandist" action, which the country is vigilantly aware of.