Analyst Warns Russia Will Respond to F-22 Deployment in Europe 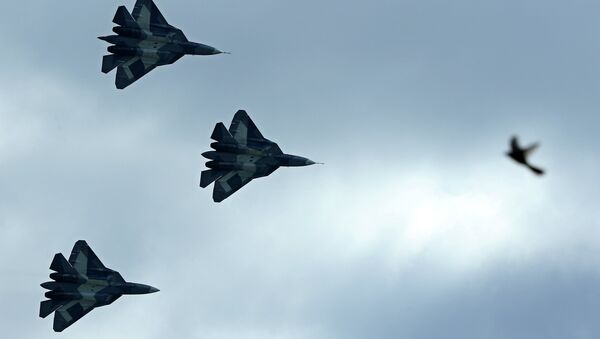 © AFP 2021 / KIRILL KUDRYAVTSEV
Subscribe
Russia will likely retaliate against the Pentagon's planned deployment of its F-22 Raptor fighters in Europe, according to Vladimir Batyuk, from the Institute for US and Canadian Studies of the Russian Academy of Sciences.

Russia Stations Iskander Missiles in Kaliningrad: NATO Cries Wolf
The US' possible deployment of its F-22 Raptor fighters in Europe will inevitably provoke confrontation between Russia and NATO; in any case, the Russian side may respond in kind to Washington's move, Vladimir Batyuk, from the Institute for US and Canadian Studies of the Russian Academy of Sciences, told Russia's RIA Novosti news agency.

"As for the fifth-generation Raptor fighter jets, their deployment will certainly be an additional impetus for Moscow to speed up the process of developing and putting on service the Russian response, the fifth-generation T-50 fighter. The Russian side may also retaliate against other similar actions by the Americans and their allies, Batyuk said.

He recalled that the Russian Defense Ministry did not rule out that Moscow may deploy additional Iskander mobile short-range ballistic missile systems in Kaliningrad, in response to the possible deployment of US heavy military hardware in Eastern Europe.

When asked whether the F-22 fighter poses a threat of a fundamentally different level to Russia, Batyuk said that it's too early to jump to conclusions.

"It is difficult to say to what extent these [F-22] planes are superior to those systems that are currently on service in Russia. In this respect, there are different points of view, but in any case, Moscow has the necessary means to neutralize this threat," Batyuk said.

US Air Force Awards $70Mln Contract to Increase F-22 Raptor Flying Hours
He predicted that this will mean an additional buildup of Russian troops and arms on its western border with Europe, which will, in turn, result in "not only political but also military confrontation between Russia and NATO."

On Monday, the Wall Street Journal quoted US Air Force Secretary Deborah Lee James as saying that Washington is considering increasing the number of its forces in Europe as well as the deployment of F-22 fighter jets there in the face of strained relations with Russia.

000000
Popular comments
slimyfox, I think the war-mongers which run the U.S. government really do believe they can win a war with Russia and China. Do you expect reality and common sense from a country that elects movie stars as leaders? Because of this there will be a war but I am not sure if it will take place in Europe or in North America. If Europe does not kick out the U.S. then the war will be in Europe. If Europe kicks out the U.S. then what is left of the U.S. will be attacked on its own shores.

Baybars
18 June 2015, 10:23 GMT
000000
slimyfox, I think that the world is coming to see the U.S. for what it is; a nest of vipers. If the U.S. think that Russian or Chinese weapons are developing faster and that either country might strike pre-emptively then the U.S. will start shooting. The U.S. have to start something soon or their crappy dollar will not be able to pay for rent on all the off-shore military bases they have. It sounds like Japan would kick out the U.S. military in a minute if there was no money available. Are you a fan of predictions and future visions? You know, like Fatima or Alois Irlmaier? Read Irlmaier here www.worldprophecies.net/Alois_Irlmaier_Prophecy.htm and you will look at our current events differently. No matter what, I wish only peace and good health to you and yours!