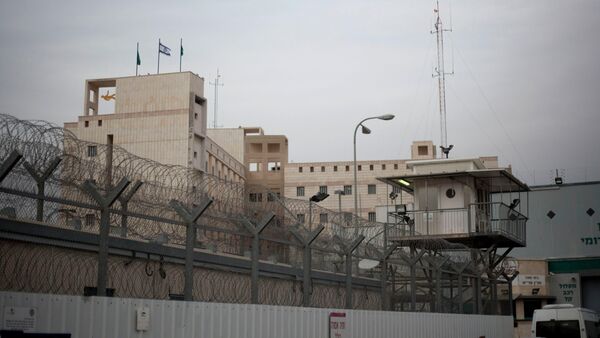 © AP Photo / Ariel Schalit)
Subscribe
International
India
Africa
The Israeli cabinet has adopted a bill to authorize the force-feeding of Palestinians who are on hunger strike in Israel's jails.

Revealed: Israel Built and Tested Dirty Bombs
A proposed law allowing the force-feeding of Palestinians who are on hunger strike in Israel's jails has been approved by the country's cabinet, sources said.

The bill on the "Prevention of Damage by Hunger Strikers," which was proposed by Public Security Minister Gilad Erdan has yet to be endorsed by the Israeli parliament (Knesset) before being signed into law.

"Hunger strikes by imprisoned terrorists have become a weapon with which they are trying to threaten the State of Israel. The cabinet's decision today sends a clear message: we will not blink in the face of any threat," Erdan was quoted by Reuters as saying on Sunday.

The bill stipulates that Palestinian prisoners must be fed forcibly if their lives are in danger; the measure should be applied after the approval of a district court judge.

The Physicians for Human Rights, a non-profit group, lashed out at what it described as "a disgraceful law that was condemned by the medical community in Israel and the world."

The group said that the law will "legalize torture and gross violations of medical ethics and international conventions."

Israel has repeatedly been alarmed about Palestinian hunger strikes in its jails, which occasionally end in death and fuel protests in the West Bank and East Jerusalem.

The Israel Medical Association, for its part, claims that force-feeding is a form of torture and that Israeli medics should not adhere to the law in case it is signed into law.