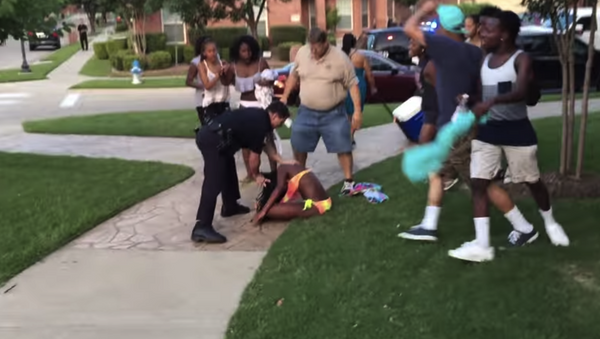 © Brandon Brooks
Subscribe
A Dallas-Forth Worth area police officer was placed on administrative leave after a video surfaced on YouTube showing police chasing and handcuffing what appeared to be teenagers at a pool party in McKinney, Texas.

According to the person who shot the video, police broke up the party on after a mother had got into a fight with another party goer at the Craig Ranch North Community Pool.

The video begins amidst the chaos.

One person can be heard telling the officer “He wasn’t involved … I know who was involved.”

Meanwhile, two males explain they had just arrived from a birthday party and were not part of any complaints made.

One officer can be heard yelling at a crowd to leave the area. That officer can later be seen driving a girl to the ground and grabbing her by her hair. He draws his weapon after a man approaches him and challenges him to a fight.

As the officer handcuffs the girl on the ground, another girl can be heard saying, “He hit me in the face.”

A man in cuffs is later escorted into the frame by police officers.

The officer later tells two teens he ordered on the ground, “You did what everyone else did. What they did is illegal. You got caught. They didn’t … I asked ya’ll to sit, you became part of the mob.”

A police official told Fox affiliate KDFW that several people were not allowed to be there and remained at the location after having been asked to leave.

The first call regarding the ordeal was made at about 7:15 p.m. Friday. Other callers also complained about multiple people fighting near the pool.

Police spokesperson Sabrina Boston did not confirm whether any arrests were made. She said the officer suspended was pending an investigation.