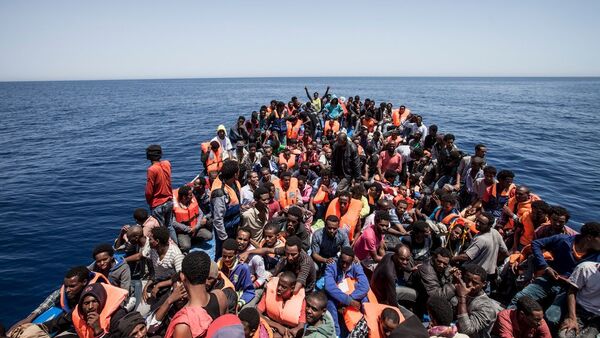 © REUTERS / MOAS/Jason Florio/Handout via Reuters
Subscribe
International
India
Africa
The G7 Research Group's director says that the African migrant crisis, religious extremism and economic growth will be on the second day's agenda of the Group of Seven summit in Germany.

GARMISCH-PARTENKIRCHEN (Sputnik), Svetlana Alexandrova — The African migrant crisis, religious extremism and economic growth will be on the second day's agenda of the Group of Seven (G7) summit in Germany, the G7 Research Group's director told Sputnik on Sunday.

Leaders of Nigeria, Tunisia, Liberia and the African Union were invited to attend Bavaria's Schloss Elmau hotel, where the summit is held, on Monday as part of the seven leading economies' outreach program to non-G7 states.

"The G7 club and outreach guest from Nigeria will discuss Nigeria's leadership in Africa and how it can contribute to global economic growth," John Kirton told Sputnik.

"The biggest reason why Tunisia has been added to the agenda was the latest migrants issue across the Mediterranean," Kirton said.

The European Union is struggling with an influx of undocumented migrants from North Africa and the Middle East via the Mediterranean Sea, where the main stream of migrants goes through Libya and Tunisia. Tunisian Prime Minister Habib Essid said last week the country was opposed to the European Union's military action to regulate the migrant issue.

Liberian President Ellen Johnson Sirleaf will also be among those invited to the Schloss Elmau resort. Sirleaf and the G7 leaders will discuss the deadly Ebola virus that has claimed more than 11,000 lives since its outbreak in West Africa in December 2013.

The G7 Research Group is a global network of scholars, students and professionals who follow the work of the G7 and monitors each member's efforts to comply with commitments made at previous summits.