UK to Consider Hosting US Cruise Missiles to Counter Russia 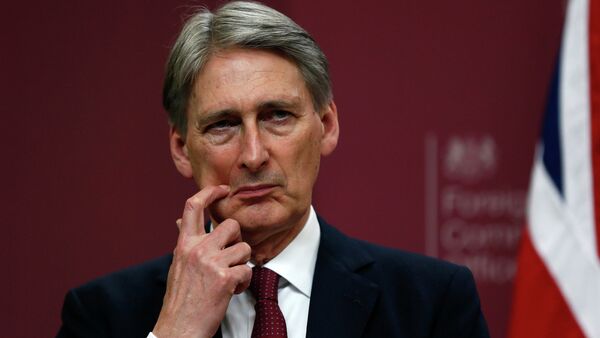 "We would look at the case. We work extremely closely with the Americans. That would be a decision that we would make together if that proposition was on the table. We would look at all the pros and the cons and come to a conclusion," Philip Hammond told BBC1's Andrew Marr show, answering the question whether Britain would have US intermediate missiles on its territory.

The development and deployment of nuclear and conventional ground-launched ballistic and cruise missiles with intermediate ranges is banned by Intermediate-Range Nuclear Forces (INF) Treaty signed by the United states and the Soviet Union in 1987.

Both the United States and Russia have repeatedly accused each other of violating the Cold War-era agreement.

The most recent reports of US allegations that Russia violated the INF treaty coincided with escalation of violence in eastern Ukraine earlier this week. The fighting centered in the town of Marinka just outside the Donetsk city, leaving at least 21 dead and over 120 others injured, according to Donetsk militia. The West was quick to blame Russia for the hostilities.

"As we go into the G7 meeting and then to the European Council later this month renewing sanctions, we’ve got to send very clear signals to the Russians that we will not tolerate any breach of their obligations under Minsk [peace agreement]," Hammond added.

The situation in Ukraine and Russia's alleged role in the conflict, which Moscow has repeatedly denied, is on the agenda of Group of Seven (G7) meeting underway in Bavaria, Germany.

Russia is not attending the event as its participation in the group’s meetings was suspended in March 2014 over Crimea's reunification with Russia and escalation of an internal conflict in eastern Ukraine.

000000
Popular comments
How is this a democracy, only 26% of the vote and they're, (the parasites) making authoritarian decisions based on discussions with America rather than what we, British citizens, say.