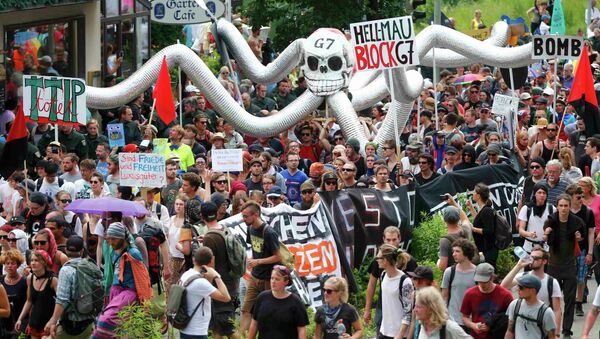 Hundreds of Anti-G7 Protesters Rally Against War Near NATO Strategy Center
MOSCOW (Sputnik) — Thousands of protesters gathered at the German resort of Garmisch-Partenkirchen on Saturday, to demonstrate against the upcoming Group of Seven (G7) Summit in Germany, a major Anti-G7 initiative said.

G7 leaders, including those of the United Kingdom, Germany, France, Italy, Japan, Canada and the United States, are due to start their meeting on Sunday. It will take place in the Bavarian Elmau Castle, outside Munich.

Thousands began a peaceful march to the central train station of Garmisch from their camp on the outskirts of town early Saturday, the Stop G7 Elmau initiative said on Twitter.

Just got hit with tear gas along with this journalist at the #g7 this is the most intense clash I ever saw pic.twitter.com/ee5QvfQGCL

The demonstrators are protesting over the G7 policies, carrying communist and anti-war banners.

The slogans included "Destroy the power of banks and corporations," "Fight G7. Fight Capitalism, Racism and War," "Hellmau, block G7," "Mom invites to dinner: Merkel’s Menu [of] 300 million euros," according to the media.

The police used pepper spray and tear gas against the peaceful protesters, at least one person was arrested, and several others were taken away by ambulances, the initiative said.

AIIB Puts G7 Team Spirit to the Test
"Police attacked the demo first…. and is responsible for the following escalation," Stop G7 said.

Police also tried to perform massive attacks on the press, the initiative said.

Since Wednesday, the Stop G7 group has prepared a week of action leading up to next Monday, according to the initiative’s website.

According to the media, at least 17,000 police have been deployed at the site to ensure security for the summit.