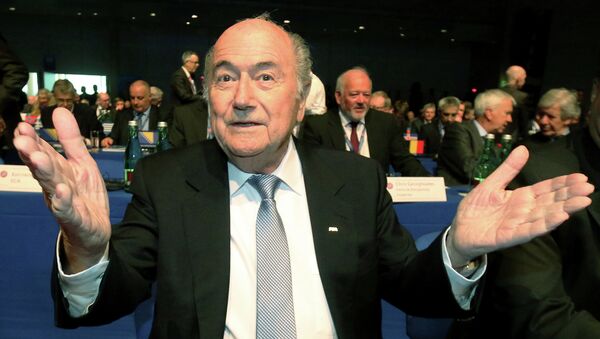 Alexander Mercouris
London-based lawyer
All materials
The resignation of Sepp Blatter, FIFA’s President, days after his re-election at FIFA’s conference, has caused a sensation.

FBI Probe Launched Into Outgoing FIFA President Blatter - Reports
The scandal at FIFA is a consequence of the wave of arrests on corruption charges of various FIFA officials in Switzerland in the days immediately before the conference.

Those arrests were the result of criminal investigations launched in the US.

Putting aside for the moment the question of whether or not the corruption allegations are true and what right the US has to investigate an organization that is based in Switzerland, the timing of the arrests on the eve of the FIFA conference makes it very difficult to believe that the arrests were not intended to prevent Mr. Blatter’s reelection.

As to the reasons for that, it is difficult also to avoid the view that this is not because of British and US anger at the failure of their bids to host the 2018 and 2022 World Cups, and the success respectively of Russia and Qatar in their place.

Ever since Russia and Qatar won their respective bids, the British media in particular, like the arch-typical bad loser, has run a relentless media campaign along the lines of “we were robbed”.

No evidence for that has ever come to light, and as of the time of writing it has not done so, notwithstanding the investigations currently underway.  What we have instead is evidence that — somewhat embarrassingly — appears to point to the finger of suspicion toward certain US individuals and companies, who seem to have been involved in corrupt merchandising deals.

Russia
Russia Continues Working With FIFA on 2018 World Cup Preparations
The absence of evidence of corruption in the 2018 and 2022 bidding process has not however prevented a constant drumbeat of demands from the British media for the whole bidding process to be reopened, and this has continued loudly ever since the arrests last week.

In light of this, it is difficult to believe that the corruption investigations were launched for any purpose other than to force a re-opening of the bids.

Quite apart from US and British resentment at the failure of their bids, there is also undoubtedly a geopolitical factor.

The US orchestrated a campaign against the 2014 Winter Olympics in Sochi on the strength of a minor Russian law intended to prohibit propaganda of what the law defines as non-normative sexual relationships, primarily on the internet. The existence of that law was used as a pretext to demand a Western boycott of the Sochi Olympics, though the connection between the Olympics and the law is non-existent.

The reality is that the US is never happy with high profile international sporting competitions such as the Olympics or the World Cup being staged in Russia.

It organized a boycott of the 1980 Olympics in Moscow, it not so very discreetly supported a campaign against the 2014 Winter Olympics in Sochi, and it is obviously unhappy at the possibility that Russia might stage the World Cup in 2018.

This is at least in part because the US is uneasy with the favorable view global opinion (including US public opinion) might form of Russia if it staged a successful high profile sporting competition.

Beyond that there is also the question of the very large profits certain companies and individuals in Britain and the US can expect to make if international competitions are held on their territories.

Whilst some of the corruption allegations made against FIFA officials are doubtless true, the sad truth is that corruption in international sport took off following its overt commercialization in the 1990s, with the commercialization of the 1996 Atlanta Olympics and the corrupt bidding process for the 2002 Salt Lake City Winter Olympics, arguably marking the watershed.

Since then money and sport have walked hand-in-hand, and the anger in Britain and in the US at the defeat of their bids for the World Cups of 2018 and 2022 undoubtedly reflects the anger of some people there that opportunities to make money from hosting these major international sports competition failed to come their way.

Beyond that there is the undoubted resentment of many in Europe that control of world football, a sport Europe (and Britain especially) feels it owns, is slipping away.

Once upon a time it would have been inconceivable that a World Cup competition could be held anywhere other than in western Europe or Latin America. The fact that FIFA intends to stage the World Cup in places like Russia and Qatar was bound to feed resentment, and so it has proved with the European football association UEFA in particular leading the charge against Mr. Blatter.

In all the circumstances it is not surprising that Mr. Blatter himself has become the target of all this anger and resentment and that given the forces arrayed he has succumbed by resigning.

The big question now is whether the World Cup competitions in Moscow in 2018 and in Qatar in 2022 will go the same way.