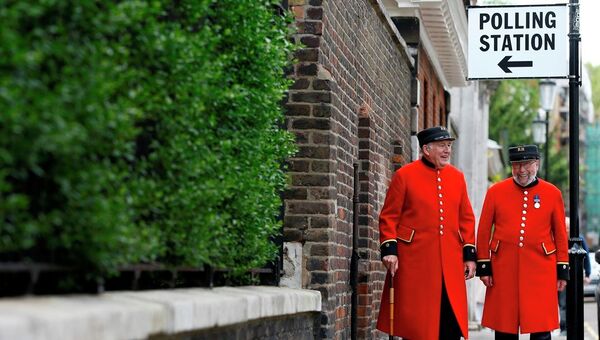 The UK stands out in Europe as having an archaic and unfair voting system that delivered David Cameron a majority government despite only polling 36.9 percent of the vote, a spokesman for the Electoral Reform Society told Sputnik.

The UK general election in May 2015 saw David Cameron's Conservative Party win a slim majority in the House of Commons in the first-past-the-post voting system in which 331 of 650 MPs were elected on less than 50 percent of the vote, and 191 with less than 30 percent of the electorate.

Report highlights ‘divisive and disproportionate’ voting system — and how election could have been different http://t.co/fbvk8AgAZJ

Over ten million people voted for the UK Independence Party (UKIP), the Scottish National Party (SNP), the Liberal Democrats, Plaid Cymru, the Green Party and other smaller parties — a third of all votes cast. Yet, whilst the SNP managed to translate support into electoral success, elsewhere these votes have little weight in a system designed to favor the two largest parties.

The Conservatives won an overall majority on a minority of the vote, and the Liberal Democrats lost nearly all their seats — despite winning 8% of the vote. The SNP won 50% of the Scottish vote share, but 95% of Scottish seats. Whilst the anti-Europe party UKIP and the Greens won 16% of the vote, they only returned two members of parliament.

"At this election we've seen the most disproportionate electoral result in UK history. We've seen the Greens and UKIP get five million votes, yet only get two seats. So it's really been a democratic crisis and a lot of people are saying it's time for reform after what's been a shocking result."

The UK operated a first-past-the-post system which was originally conceived in a two-party system, whereby the first party in the two-horse race to achieve a simple Commons majority would form a government. However, over the years, more smaller parties have entered politics and are effectively discriminated against, because they fail to win seats, despite achieving a fair share of the popular vote.

Interesting exercise in @electoralreform's new report — what if #GE15 had been held under list PR, AV or PR-STV? pic.twitter.com/C3NU7LwFrX

Mortimer told Sputnik: "A lot of people are really angry and we saw half a million people sign a petition calling for electoral reform after the general election, which was handed in to Downing Street. UKIP, the Greens, the SNP and the Liberal Democrats are all saying the time has come for a debate. We're calling for a constitutional convention, which is a debate among ordinary citizens to say what is best for Britain and how can we get root-and-branch reform of the electoral system."

The UK is alone in Europe in not having some form of proportional representation at national elections. Mortimer told Sputnik:

"Britain is the last country in Europe to use such and outdated and archaic system. Nearly every country in Europe uses a proportional voting system. We are really behind on this and most people are saying it's time to bring our democracy into the 21st century."