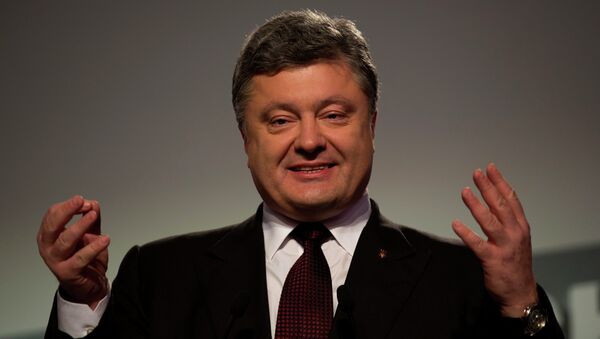 Petro Poroshenko's income increased sevenfold in the first year of his presidency while Ukraine's economy has been teetering on the brink of collapse as the country is ravaged by corruption, lack of reforms and a civil war.

According to public data, Poroshenko's 2013 income of 52 million hryvnia (approximately $6.3 million) skyrocketed to 369 million hryvnia (over $17 million) in twelve months. The income has largely come from selling securities, dividends, interest and real estate.

One Year On: How Many Election Promises Has Poroshenko Kept?
The Ukrainian president, dubbed the Chocolate King for owning a major sweets company, is estimated to be one of the wealthiest people in the country. His massive business empire also includes banking, agriculture, energy, auto and shipbuilding, as well as mass media.

The Roshen Confectionery Corporation is the crown jewel of Poroshenko's assets, which the politician promised to sell should he win the 2014 presidential election. The company is one of the largest confectionery corporations globally, with the Candy Industry Top 100 pacing it 18th three years ago.

Poroshenko secured 54.7 percent of the vote grabbing the victory in the first round held on May 25, 2014. One year on he still controls the majority of his assets, including Roshen. Hence, the impressive income.

Keep in mind that state officials are prohibited from owning a business under Ukraine's constitution.

Not So Sweet Deal: Poroshenko Accuses Russia of Meddling in Sale of Roshen
Earlier this year, the Ukrainian president complained that it was hard to find buyers for Roshen, whose market value is estimated at $1.5 billion. Poroshenko wants $3 billion for the company, which one of the world's largest confectionery companies, Nestle, is ready to buy for no more than $1 billion.

Meanwhile, Roshen continues to thrive unlike the ever fragile national economy. In 2014, Roshen's profits increased nine-fold, while Ukrainia's GDP fell 15 percent, not to mention the $42.5 billion debt the country has to pay.

The hryvnia lost half of its value against the US dollar in the same time frame, which could partially account for the significant bump in Poroshenko's income if his accounts were in foreign currency. Forbes put Ukraine's president net worth at $1.3 billion.