Leader of the French National Front party Marine Le Pen has criticized Paris for failing to fulfil its contractual obligations and deliver Mistral helicopter carriers worth 1.3 billion dollars to Russia.

"The decisions that have been made regarding the Mistrals, the strange behavior of top French politicians, who refused to attend recent commemorative events [Victory Day celebrations in Moscow], I think this is nothing but obedience to the United States."

Earlier in May, Russian newspaper Kommersant reported that Paris had proposed to terminate the contract, offering to pay some 785 million euros ($865 million) back, on the condition that Russia allows France to sell the ships to a third party. Moscow reportedly denied the offer, since the costs and losses Russia associated with the breach of the contract are currently estimated at about 1.163 billion euros. 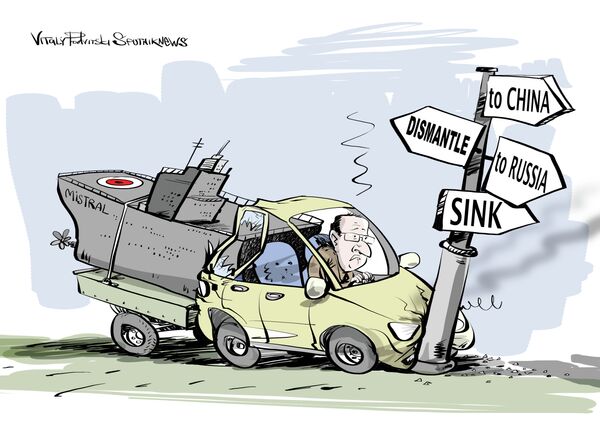 Russia Officially Gives Up on Mistral Deal
French President Francois Hollande along with some other Western leaders declined invitation to attend the Victory Day celebrations in Moscow on May 9 marking the end of WWII in Europe.

The National Front party is one of the largest parties in France, and is known for taking a different stance on current affairs than that prevailing in the West. Le Pen has repeatedly stated that the policy of sanctions against Russia in regards to the Ukrainian crisis was "not a good idea" and urged countries to pursue their own agenda.

The French government is heavily influenced by the United States, including on the issue of anti-Russian sanctions, Marine Le Pen said on Tuesday.

"The problem is that – as I have repeatedly said — the French government, both the current cabinet of Francois Hollande and [Nicolas] Sarkozy's government are very much influenced by the United States. The United States played a big part in [adopting] anti-Russia sanctions."

Le Pen added that she hoped France would claw back its diplomatic freedom, but doubted that this was likely under the current Hollande's government.

Le Pen holds meetings with Naryshkin twice a year to exchange views on major global issues, such as the Ukrainian crisis, the Islamic State threat and the economic situation.